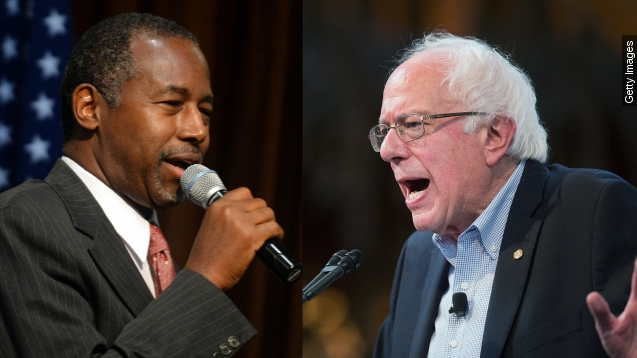 SMS
Sanders' And Carson's Fundraising Skills Are Pretty Similar
By Kate Grumke
By Kate Grumke
October 1, 2015
The way Sanders and Carson are raising their money looks pretty similar, even if their donors probably don't.
SHOW TRANSCRIPT

The third round of campaign funding wrapped up Wednesday, and 2016 hopefuls are starting to tell us what they made.

Two of the talkers this time around are Bernie Sanders and Ben Carson.

While their platforms have almost nothing in common, financially, they're starting to look pretty similar. And they're both beating expectations.

By comparison, only 1 percent of Jeb Bush's donations were $200 or less.

That led NPR to dub Carson and Sanders the "Grassrootsiest Candidates" back in August.

And in this round, both campaigns announced some pretty impressive numbers during the last quarter.

Sanders raised $26 million in the third quarter — $2 million of which came in the last day. He was close behind Democratic front-runner Hillary Clinton who reported $28 million.

And Carson raised more than $20 million in the third-quarter ending Wednesday, which put his total at $31 million. It comes during his jump in the polls, putting him just behind Donald Trump.

So while they're both political outsiders in one sense or another, they're also both looking like insiders when it comes to money.