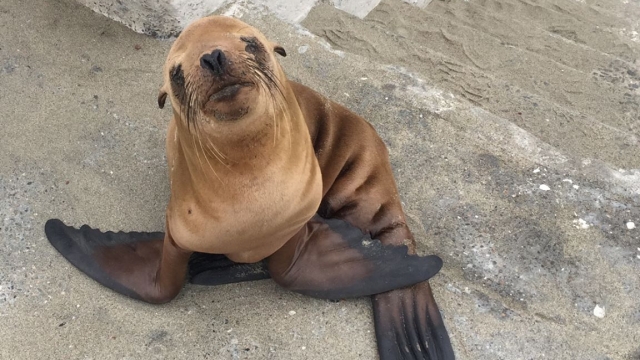 While many people had a day off from work on Memorial Day, it was a good thing several San Francisco police officers were on duty because they rescued this baby sea lion.

It was stranded in an empty stairwell at Ocean Beach early Monday morning.

The officers stayed with the sea lion — which is believed to be 11 months old — until rescue workers could pick it up.

A spokesperson from a local rescue center told KTVU the sea lion is malnourished, weighing only 27 pounds.

It could be one of two types found in California.

One is the California sea lion, which can weigh as much 850 pounds. But stellar sea lions are much larger, weighing up to 2,500 pounds when fully grown.

Since 2013, unusually high numbers of baby sea lions have washed up on California beaches. A record 3,340 were stranded in 2015.

As a shelter cares for the rescued sea lion, the officers gave the animal a name.