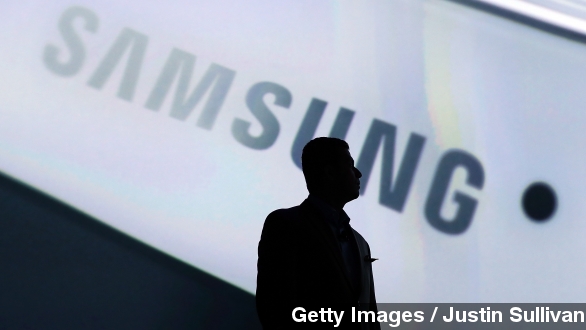 SMS
Samsung's LoopPay Aims To Take On Apple Pay
By Ben Lawson
By Ben Lawson
February 19, 2015
Samsung has acquired mobile-payment startup LoopPay, which could have a wider reach than Apple Pay.
SHOW TRANSCRIPT

Mobile payments are still very much in their infancy, but that hasn’t stopped tech companies from aggressively expanding their efforts in the field.

The latest move comes from Samsung. The South Korean company recently acquired LoopPay, a mobile payment startup that might have a wider reach than Apple Pay.

That's because LoopPay estimates its system is accepted at more than 90 percent of U.S. payment terminals. LoopPay works using a magnetic signal that mimics the strip on traditional credit cards. That means it works on most existing traditional payment machines.

Apple Pay, on the other hand, uses a near-field communication, or NFC, chip to make transactions, which requires retailers to adopt new machines to make the system work. (Video via The Verge)

So because LoopPay would require little to no action from retailers, it will likely be much easier to implement.

But unlike Apple Pay and its NFC chips, LoopPay is not currently built into any phones on the market, so it might take a while before it's widely used. (Video via CBS)

Now, Apple and Samsung, the two leading smartphone makers in the U.S., have two different methods for mobile payments, in addition to all the other systems out there, such as Softcard.

However, having multiple methods to making mobile payments work could created another barrier for the industry: retailer confusion.

And consumers could wind up lost about which places accept their preferred mobile payment method.

Let's also not forget that a group of some of the U.S.'s top retailers have joined together to create their own payment system and have already shut out Apple Pay from their locations.

So its quickly becoming a cluttered and chaotic field before most consumers have showed much interest in adopting mobile payments.