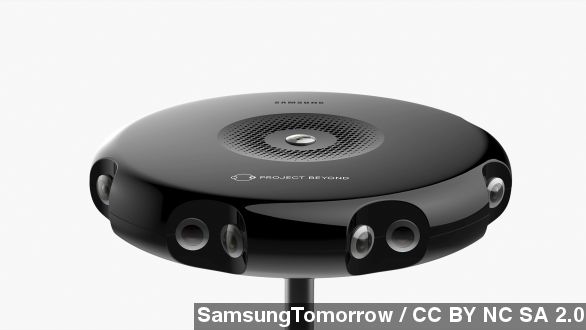 It’s not a vacation, but Samsung’s Project Beyond camera might provide the next best thing.

It takes footage of places and events like any other camera, but in an interactive, 360-degree 3-D panorama. Combined, its 17 cameras capture a gigapixel — or a thousand megapixels — of video data every second.

Samsung showed off the camera at its developers conference this week in San Francisco. The idea is to stick a user with Samsung’s Gear VR 3-D headset inside that panorama — to get as close to being there as one can be, without actually being there.

The feeling of presence makes or breaks a VR experience. Writers at Engadget and The Verge say Project Tomorrow looks promising — but note the prototype still has work to do. (Video via CNET)

“The 3-D video did give me a tiny bit of a headache as I turned around in a circle, and I was surprised at how grainy and pixelated the video was -- the combination of the two took me out of a supposedly immersive experience.”

“Naturally, your instinct is to step forward and explore the world, but Project Beyond is a stationary camera. You can see what the camera sees from the place it was set down, and no more.”

PCWorld points out bandwidth is probably an issue, too. It’s tough to pour sixteen cameras worth of footage over a wireless connection.

Samsung did say Project Beyond wasn’t consumer-ready yet — and hasn’t even announced plans for production, for that matter. But it plans to make content it captures with the device immediately available to anyone who has a Gear VR.

And the headset, at least, is on track for release — TechCrunch reports Gear VR will be shipping in early December, starting at $200. You’ll have to bring your own Galaxy Note 4, though. That’s the only handset that will work with the goggles so far.