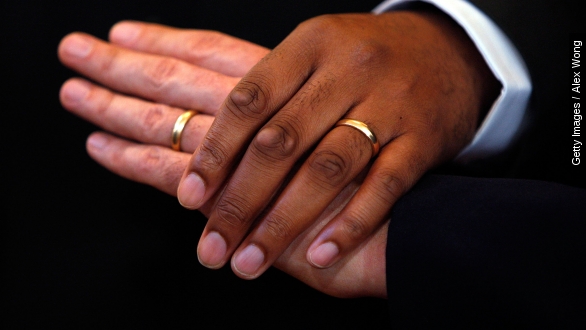 Tax season is nearing its end and for some Americans, this year has been particularly confusing when it comes to deciding on a status to file under.

In some cases, couples have had to fill out five different tax returns this year. Couples filing a joint federal return but separate state returns have been running into difficulties. As Ohio resident Sandra Anderson explained to Bloomberg, dividing a married couple's income is a lot like "unscrambling an egg." (Video via CBS)

The outlet also talked to a financial group in Atlanta, which has recommenced its married LGBT clients who are filing under single status to write in big red letters at the top of the form "Filed under protest. Taxpayer is not single."

Our partner in Kansas City, KSHB talked to a same-sex couple who is in the same boat.

"We've been together almost 16 years. ... And I don't like lying to to state and saying 'no, we're no married,' when in fact we are," Dave Greenbaum told KSHB.

The extra hoops gay couples have to jump through has brought up questions of constitutionality.

"It's unconstitutional, it's discriminatory and it's wrong. ... It should be that simple. If you're married, you're married and you get the rights that marriage brings with it," Lawyer David Brown told KSHB.

Those questions and so many more could be answered this summer, when the Supreme Court is expect to rule on whether all 50 states should be required to allow same-sex marriage.

For same-sex couples who have not yet filed, filing an extension is also an option. There are also tons of tips through the IRS and other sites like TurboTax. Currently, more than 30 states around the county recognize same-sex marriage.