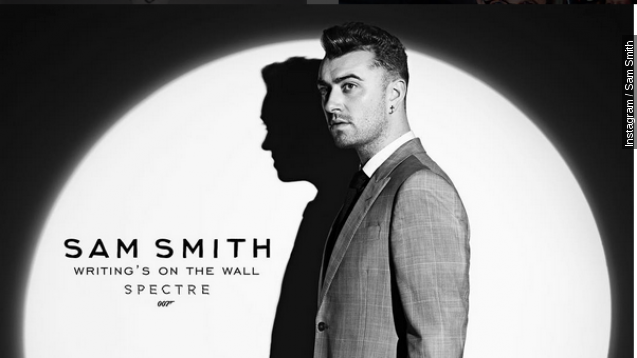 He claims he sings for his supper, and after hearing "Writing's On The Wall" by Sam Smith, someone better get this man a nine-course feast. The "Stay With Me" singer is the voice behind the new James Bond theme song, and the sound is just as adventurous as Bond himself. (Video via Columbia Pictures / "Spectre")

The "Spectre" theme song dropped while America was still asleep. Smith warned all of his Twitter followers across the pond for its release, saying "he's been dreaming of this moment for a long long time." Us too, Sammy.

The song illustrates how well Smith utilizes his upper register, singing such lyrics as "How do I live? How do I breathe? When you're not here, I'm suffocating" in a beautiful falsetto. Smith described his lyrics to NPR.

"I tried to put myself in the shoes of Bond. My music is a diary and it's a recap of my life. And I wanted to kind of bring that honesty in the lyrics," Smith told NPR.

Smith later thanked his followers for all of the amazing messages. He joins the Bond-theme ranks of Adele and Shirley Bassey, and is the first British male singer to sing the theme song since 1965.

Smith initially denied he was the voice behind the new 007 song, but later confirmed on Instagram he was honored to join the iconic British legacy.

So if you're wanting your Friday to start in an epic way, the song is available on iTunes and Spotify. Or if you want to be crazy and tease yourself until the film, "Spectre" is set for worldwide release on Nov. 6.