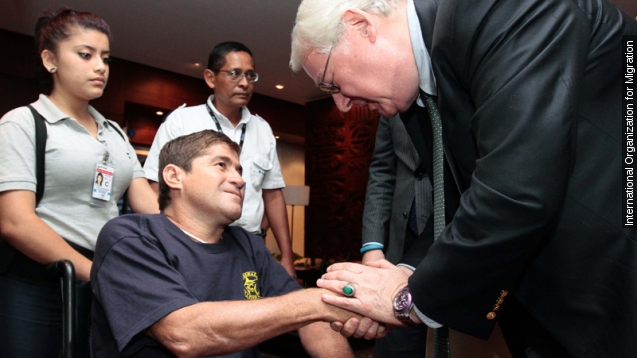 SMS
Salvadoran Castaway Sued For Allegedly Eating Crewmate
By Melissa Prax
By Melissa Prax
December 18, 2015
José Salvador Alvarenga was lost at sea for over a year. Now the family of his deceased crewmate accuses Alvarenga of eating the corpse.
SHOW TRANSCRIPT

When he washed ashore a few years ago after spending over a year at sea, this castaway quickly made headlines.

But José Salvador Alvarenga is now being sued for cannibalism. (Video via Univision)

When he took off with Ezequiel Córdoba in 2012, Alvarenga got lost at sea. He said he and Córdoba stayed alive by using the resources around them — birds, fish and even turtle blood — but eventually Córdoba got weary and died. (Video via CNN)

Before Córdoba died, Alvarenga promised he would say a final goodbye to his mother for him. He said he eventually threw Córdoba's corpse off the ship. (Video via Cadenatres Noticias)

Now, Córdoba's family is suing Alvarenga, which some say is fueled by a recently released biography about Alvarenga's time at sea.

In addition to the suit from Córdoba's family, Alvarenga also faces a $1 million breach of contract suit filed by his former lawyer.

This video includes images from the International Organization for Migration and Simon & Schuster.