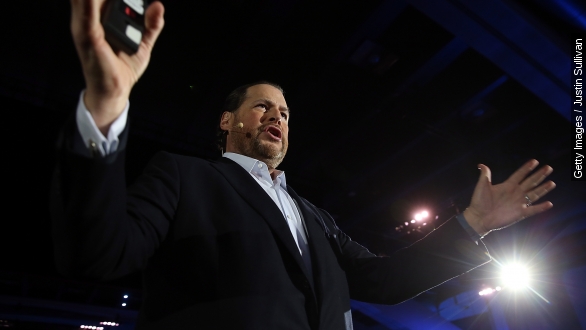 SMS
Salesforce's CEO Wants To Eliminate The Gender Pay Gap
By Evan Thomas
By Evan Thomas
April 24, 2015
Marc Benioff says he'll review the salaries of all 16,000 employees at his company to ensure everyone gets equal compensation.
SHOW TRANSCRIPT

Speaking to The Huffington Post, Benioff said he is reviewing the pay of each of his company's employees to ensure men and women receive equal compensation.

"My job is to make sure that women are treated 100 percent equally at Salesforce in pay, opportunity and advancement. When I'm done there will be no gap."

The pay changes are part of a program at Salesforce called Women's Surge, which, in addition to eliminating the pay gap, is intended to balance out employment at the company.

Overall, 29 percent of Salesforce's workforce is women. In leadership roles, that proportion shrinks to 15 percent.

You can see some of the same skew in numbers from across the country. Numbers from the Department of Labor show the nation's full-time workforce is 41.6 percent women and 58.4 percent men.

In the tech sector, where Salesforce competes, the imbalance is more pronounced. At Google, Apple and Twitter, for example, the company-wide proportions of women in the workforce all stand at 30 percent.

"This is one announcement by one company. But Salesforce has been a leader in many industry changes, and I'm a big believer in peer pressure, so I hope the dominoes keep falling," said Noreen Farrell of women's rights nonprofit Equal Rights Advocates. (Video via KBCW)

Salesforce is also tackling other social equality issues. Earlier this month the company paid to help its employees relocate from Indiana after the state passed a controversial "religious freedom" law.

"This law, though, is just brutal. It opens up a level of discrimination to those employees and customers that is just unacceptable," Benioff told CNBC.

Benioff told The Huffington Post the current review of his workforce's salary — for all 16,000 employees — could take a couple of years.