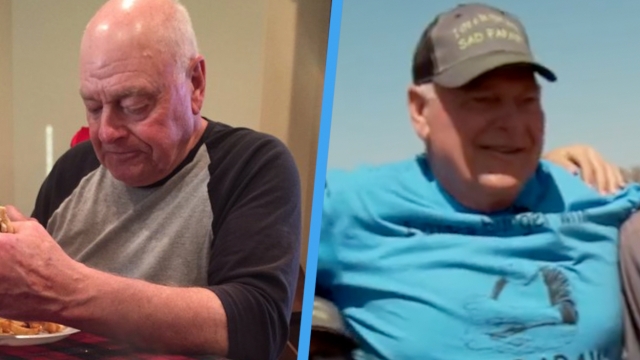 SMS
Sad Papaw's Burger Cookout Was A Huge Success
By Matt Moreno
By Matt Moreno
March 27, 2016
Sad Papaw hosted a cookout on Saturday, and hundreds of people from all over the world joined.
SHOW TRANSCRIPT

"Hard to believe that this many people are excited about a cookout," Kenny "Sad Papaw" Harmon told Newsy's partners at KJRH.

Yes, more than one person showed up for burgers with "Sad Papaw" this time around.

Sad Papaw, whose story went viral on the Internet recently, hosted a cookout Saturday, and people from all over came to a small Oklahoma town to attend.

The story of the famous granddad went viral after his granddaughter Kelsey posted this picture, saying he made 12 burgers for his six grandkids but she was the only one to show up.

Sad Papaw's son told Newsy's partners at KJRH it was all a misunderstanding — a busy work day led to information about the dinner not getting passed along.

Shortly after the viral post, Papaw's family decided to host a public cookout.

And on Saturday, hundreds snapped up the $2 burgers and bought "I ate a burger with Papaw" T-shirts.

"My grandkids have always been very, very special to me," Harmon said.

Papaw's grandkids say the message to take from this is to spend time with your grandparents.