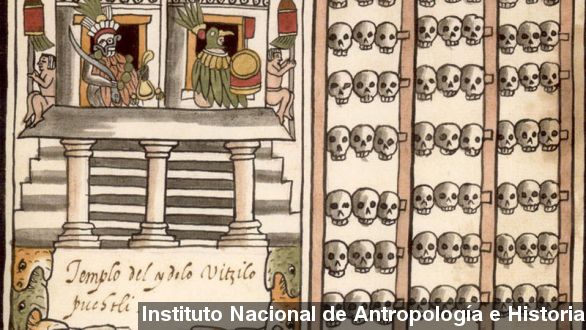 By Jasmine Bailey
January 2, 2014
Archeologists in Mexico found the skulls of humans and a dog used in Aztec sacrifices. They were discovered after a subway extension project.
SHOW TRANSCRIPT

Archeologists in Mexico City have unearthed a gruesome discovery under a subway system — four skulls that were once displayed on an Aztec sacrificial offerings rack.

Researchers estimate the remains originated anywhere from 1350 to the 1520s, and the skulls show signs of being hung on a Tzompantli. (Via YouTube / DNews )

Which roughly translates into "skull banner." Some were made up of the heads of thousands of victims sacrificed to Aztec gods. (Via Wikimedia Commons /  CJLL Wright)

"Aztec culture involved human sacrifice. Evidence indicates the Aztecs may have been murdering as many as 20,000 victims a year." (Via History Channel)

And because of that, finds like these aren't extremely rare. But this most recent discovery is a bit different. The four skulls found weren't all human — one was a dog.

According to Mexico's National Institute of Anthropology and History, this is the first time a dog's skull has been found among the human skulls used for a sacrificial rack. Two women's skulls were also among the recent discovery. (Via Gizmodo)

Archeologists speculate women and dogs might have been thought to be important guardians into the afterlife in Aztec culture.

Horses have been found to be used in Tzompantlis and hung next to the skulls of their Spanish riders. Yeah, kind of creepy. (Via YouTube / docufans2)

Also among the discovery in Mexico City — traditional burial sites and sculptures.