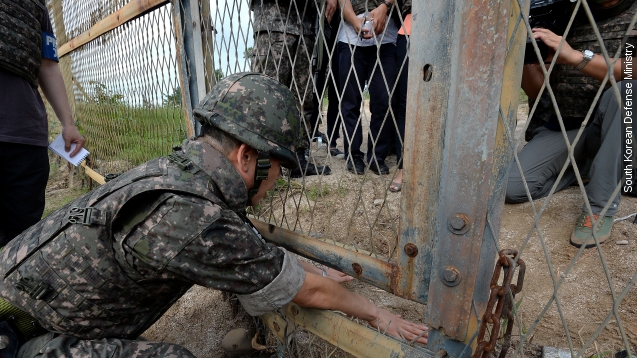 Both soldiers suffered serious leg injuries, with one needing to have both legs amputated. The New York Times quotes a South Korean military spokesman saying, "We swear a severe retaliation." (Video via Arirang News)

South Korean officials had originally dismissed North Korea as being responsible for the Aug. 4 incident.

A South Korean military spokesman told reporters, "I am very sad about the unfortunate accident that took place during an operation."

But Monday, after inspecting the land mines' debris, a spokesman said, "We are certain they were North Korean land mines planted with an intention to kill."

A professor in Seoul told the New York Times the type of mines used often do not kill the victim, making them powerful weapons psychologically.

South Korea has turned to a psychological weapon of its own, saying it will resume broadcasting propaganda to North Korean territory. The country stopped propaganda broadcasts more than a decade ago.

North Korean officials have yet to comment on the incident. After its own investigation, the U.N. condemned the incident as a violation of the Armistice Agreement.