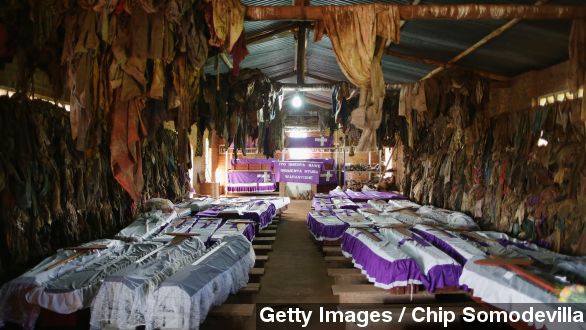 The Rwandan government headed by President Paul Kagame has suspended all BBC Radio broadcasts in the country in response to a documentary the network aired about the secrets of the Rwandan genocide.

BBC: "The senseless barbarity of the genocide still shocks us. We think we know the story, but do we? What the world believes and what actually happened are quite different."

The documentary, "Rwanda, The Untold Story," claims Kagame may have played a part in the plane crash and death of Rwanda's president in 1994, which triggered the genocide.

The program which premiered October 1 quotes U.S. researchers who say more than 800,000 of the up to 1 million people massacred weren't ethnic Tutsis, but were actually Hutus — the group most often blamed for the slaughter.

Rwanda's foreign affairs minister called the program an "attack on Rwanda and its people." According to the government, they've received complaints of "incitement, hatred, divisionism, genocide denial and revision," about the documentary.

But there's a definite divide among reporters about the accuracy of the BBC report.

Reporters Without Borders points out Kagame's administration has a history of refusing to comment on the genocide and of censoring media outlets. The head of the organization's Africa desk said the BBC is one of the only independent media outlets in the country to be heard.

But a writer for Rwanda's English paper, The New Times, said the program runs contrary to the thinking of scholars, journalists and those who know Rwanda's history. "The documentary, so-called Rwanda's untold story, actually inverts the real story that Rwandans have lived and others witnessed, and told many times even by the BBC."

Still, the BBC has defended the program, reiterating its "duty to investigate difficult and challenging subjects."

April 2014 marked the 20th anniversary of the Rwandan genocide. Rwanda's courts have tried nearly 20,000 individuals connected to the massacres.