Russians Will Give Up Food For Putin, Minister Says 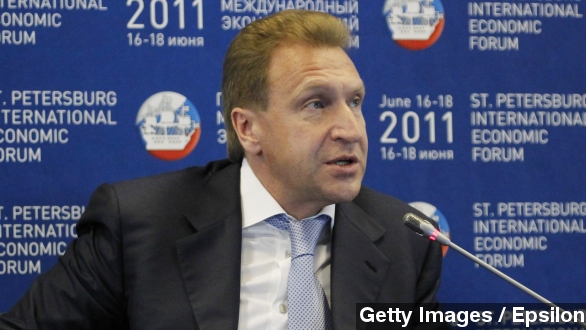 Russia is facing recession but standing its ground at the World Economic Forum in Davos. On Friday the nation's deputy minister said Russia "will eat less food" for Putin if necessary.

"The ruble is still in free fall," Bloomberg reported.

Ukraine is still fighting off Russian-backed militants — and reportedly even covert Russian troops. Violence at the Donestsk airport was captured here by a BBC drone.

Of course, that violence has led to crippling economic sanctions from the West, especially from the U.S.

Couple that with the tanking price of Russia's big export, oil, and now Vladimir Putin and his country are in financial crisis.

But just as the Russian ruble has been falling, Putin's approval rating is soaring. His government and tightly state-controlled media have convinced Russians they're the victims of unjust foreign punishment.

And that's the rationale behind comments like the one from Deputy Prime Minister Igor Shuvalov, who said at the Davos economic forum that the lower and middle class will stick with Putin despite his economic dilemma.

Now, Shuvalov is one of the richest men in Russia, and some Russians on Twitter pointed that out — contrasting the minister's confident comments with his sizable financial cushion.

Also at Davos, Putin's former finance minister said the Russian leader believes his efforts to claim more influence and territory in eastern Europe are worth the toll on Russia's economy.