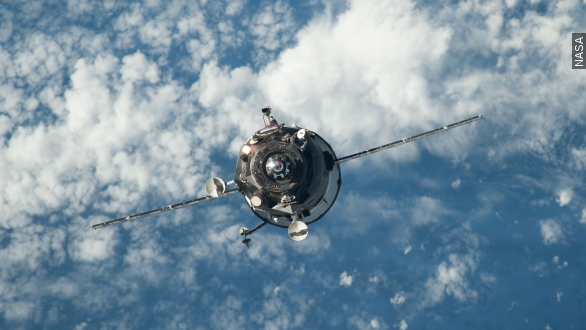 SMS
Russian Resupply Spacecraft Burns Up Over Pacific Ocean
By Evan Thomas
By Evan Thomas
May 8, 2015
The unresponsive cargo drone would have made noncritical deliveries to the International Space Station.
SHOW TRANSCRIPT

This fiery end was only a matter of time. Russia’s Progress 59 mission ran into trouble more than a week ago, when the spacecraft stopped responding to commands shortly after launch.

It entered an uncontrolled spin and Earth’s gravity pulled it back into the atmosphere. (Video via NASA)

The robotic spacecraft was carrying more than three tons of fuel and equipment for the crew of the International Space Station, and it should have been routine: the Progress program has been resupplying the ISS for the last 15 years, and has lost only one other spacecraft. (Video via NASA)

“Russia’s space agency is investigating the failure of the Progress craft, and hoping to understand what exactly caused the $50 million mission to go wrong,” said Al Jazeera’s Tarek Bazley.

According to the Russian state news agency TASS, early investigation shows evidence of an “emergency situation” with the third stage of the rocket that was boosting Progress to orbit.

Inspectors will go over the rest of Russia’s launch vehicles to see if it’s a shared problem. (Video via NASA)

In the meantime, the ISS crew is in no danger, from debris or from running out of supplies: NASA reiterated Thursday the crew has enough stores to last past even the next planned resupply flight. (Video via NASA)

Some debris from Progress 59 is expected to make it all the way down to the surface, but it will splash down in the Pacific and won’t pose a danger to populated areas.