Russian Jets Buzzed A US Ship. Here's 1 Reason They Weren't Shot Down. 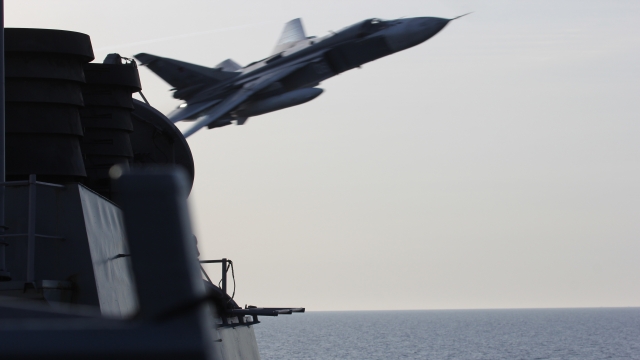 SMS
Russian Jets Buzzed A US Ship. Here's 1 Reason They Weren't Shot Down.
By Jake Godin
By Jake Godin
April 14, 2016
One of the Russian fighter jets came within 30 feet of a U.S. naval ship.
SHOW TRANSCRIPT

This is a Russian Sukhoi Su-24.

Two of the Russian fighter jets flew over the USS Donald Cook multiple times in the Baltic Sea.

The jets got as close as 30 feet. A Russian Kamov Ka-27 Helix also flew a little close.

The jets didn't have any weapons on them. But the U.S. says the flybys were still unsafe and unprofessional.

Russia says the jets were only making "planned training flights." The Donald Cook just happened to be in the way …

As for why the U.S. didn't shoot the planes? A retired Navy officer told The Navy Times, "You don't get to kill people just because they're being annoying."

This video includes images from the U.S. Navy and music "[osaka]" by Birocratic (birocratic.bandcamp.com/).