Russian Anti-Smoking Campaign Urges People To Not Be Like Obama 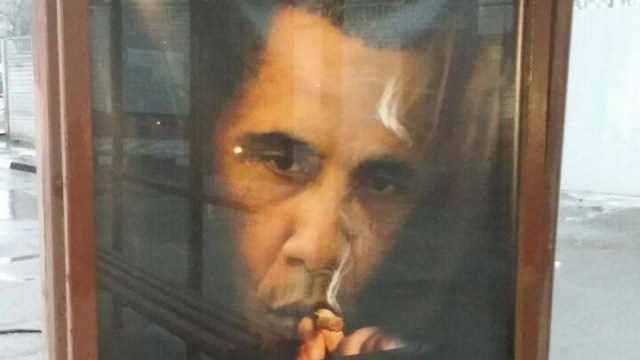 We've all seen the anti-smoking ads depicting people we'd rather not end up like as a deterrent for smoking cigarettes.

Yes, President Obama, and in case you don’t read Russian, the text says: "Smoking kills more people than Obama, although he kills lots and lots of people. Don’t smoke, don’t be like Obama."

The Centers for Disease Control and Prevention estimated tobacco use kills 6 million people per year worldwide, so saying that smoking kills more people than Obama is accurate. But one Russian member of parliament isn't happy that a world leader is being vilified for an agenda.

Dmitry Gudkov, who posted the photo on Facebook, said it was "disgusting and embarrassing that this is appearing on the streets of the Russian capital."

But Gudkov is the only liberal opposition member of parliament in Russia, so he may not have a lot of support in that.

Although the uncredited ad attempts to scare off would-be tobacco users who want to avoid being compared to the president, Obama quit smoking because there’s apparently someone even scarier.

"No, no I haven't had a cigarette in probably six years. That's because I’m scared of my wife," Obama said.

This video includes images from Facebook / Dmitry Gudkov and clips from Centers for Disease Control and Prevention and CNN.