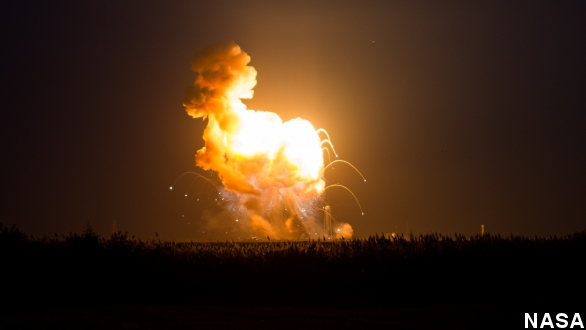 Tensions between the U.S. and Russia have produced a number of Cold War allusions in the media lately, and now the recent American aerospace disasters have put the era's Space Race in the spotlight.

The Antares rocket explosions last week in Virginia destroyed the rocket along with the Cygnus cargo spacecraft it was meant to take to the International Space Station. (Video via NASA)

Then, just three days later, a Virgin Galactic spacecraft crashed during testing in Arizona, killing one of the ship's pilots. (Video via RT)

And as Global Voices writes, it didn't take long after Tuesday's crash for Russian media outlets to take notice. "RT is catching flack online ... the news network described the Antares as a 'Russian-American rocket' in 2013, after several successful launches, but suddenly called it an 'American-Ukrainian' missile, when it blew up."

Global Voices also collected a number of social media posts from Russians, mocking the failure of the Antares rocket, which you can check out on their site.

After the Virgin crash, RT, which is backed by the Russian government, put out a sort of listicle, documenting what it called, "Top 5 failures of US commercial space program."

And it's not just the Russian media outlets that are playing up the rivalry.

This article from Fox News examines a Soviet Era Russian-designed component in the Antares rocket, despite officials saying they don't know whether the part played a role in the explosion.

There's a reason Russian outlets want to play up national pride over the country's space program by focusing on the faults of its American counterpart — there's a lot of national pride.

Every year, Russians celebrate Cosmonauts Day, a national holiday that celebrates the country's achievements in aerospace, and the country regularly observes Yuri Gagarin's birthday — the first man in space. (Video via Euronews)

A Russian supply mission to the ISS succeeded in delivering its cargo, only hours after the Antares explosion.