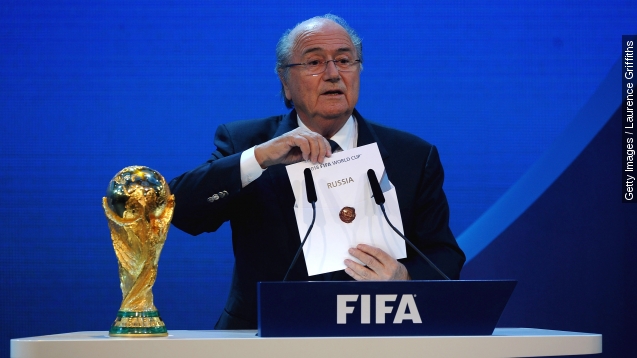 Sunday, a high-ranking FIFA official said Russia and Qatar, hosts of the 2018 and 2022 FIFA World Cup, could be stripped of those winning bids if the countries engaged in wrongdoing.

According to Swiss publication Sonntagszeitung, FIFA's compliance leader Domenico Scala said those awards will be revoked if evidence shows either country used bribes to obtain votes.

Scala also said, through translation, "This evidence has not been provided." And both Russia and Qatar deny engaging in any misconduct to score hosting privileges.

"I never gave any cash to people," Former Minister of National Security of Trinidad and Tobago Jack Warner said.

Scala's remarks come as FIFA is still reeling from an alleged wide-spread corruption scandal that has sacked its reputation in the international community, ultimately leading to long-time President Sepp Blatter announcing his impending resignation.

Both Russia and Qatar are investing heavily into World Cup operations, infrastructure and facilities, so revoking hosting duties could end up posing a serious economic threat to each nation.

And both countries expect to go all out. Russia has already dropped a big chunk of the nearly $20 billion it plans to spend funding projects for the 2018 World Cup. (Video via FIFA)

That's close to half of what it paid to host the Sochi Winter Olympics last year.

Russia's infrastructure projects include building or renovating numerous stadiums, hotels, airports and other facilities in 11 major cities to host the mega sporting event.

In particular, The Guardian says Moscow's Luzhniki Stadium, Russia's national stadium which currently seats more than 78,000 people, is "now being completely overhauled for the World Cup."

Meanwhile, Qatar is planning to spend roughly $200 to $220 billion on its World Cup in 2022. That's about 60 times the amount South Africa dropped on soccer's biggest event in 2010. (Video via The Guardian)

There's also a human cost to Qatar's World Cup preparations. The International Trade Union Confederation says about 900 migrant workers will die every year until 2022 if the often dangerous conditions many endure on construction sites are not improved. (Video via ESPN)