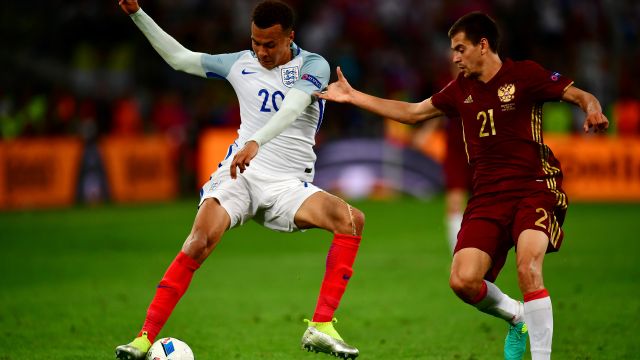 SMS
Russia Is On The Brink Of Getting Kicked Out Of Euro 2016
By Ryan Biek
By Ryan Biek
June 14, 2016
And it all depends on the team's fans.
SHOW TRANSCRIPT

If Russian fans cause any further trouble, UEFA says it will kick the national team out of the Euro 2016 soccer tournament underway in France.

The Russian Soccer Federation has already been fined more than $168,000 after an incident in which Russian fans reportedly stormed English spectators at a match between the two countries Saturday.

Fans of both teams had rioted in the streets of Marseille the day before. England's national team was threatened with a disqualification, too, but no charge has been presented by the tournament's governing body.

Six England fans were arrested for their parts in the riots, but no Russian fans were. Yet French police have said 150 Moscow Ultras, a "hyper-violent" Russian soccer gang, may be planning further attacks on opponents' fans.

The Mirror notes there's even fear the Russian government may be funding their attacks in Marseille.

On Monday, a Russian politician said he saw nothing wrong with the fans' violence. The Guardian quoted a top Russian law enforcement official saying Europe had become too accustomed to gay parades to acknowledge the fans were "real men."

As of Tuesday, the Russian team still has two matches left before the first eliminations of the tournament.

More violence may occur this week, as fans of England's and Russia's national teams are expected to be in the same French city of Lille.

This video includes clips from RT, Press TV and CCTV, and images from Getty Images.