Russia Has Major Beef With McDonald's 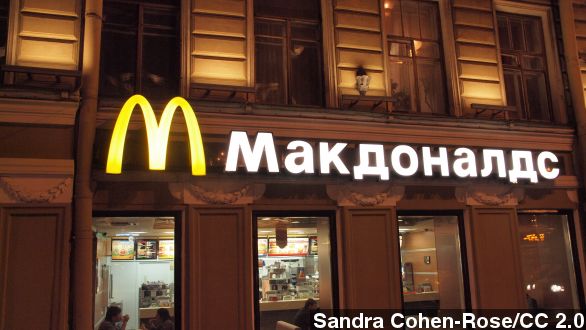 SMS
Russia Has Major Beef With McDonald's
By Ben Levin
By Ben Levin
July 26, 2014
A health complaint threatens Russia's 418 McDonald's franchises. That this comes amid growing anti-U.S. sentiment in Russia might not be coincidence.
SHOW TRANSCRIPT

There are few things more American than a meal at McDonald's — which might be bad news for the restaurant's 418 Russian locations.

A Russian consumer protection agency has, in fact, filed a lawsuit against McDonald’s in Russia, believe it or not. (Via CNBC)

The lawsuit alleges its food violates health codes and has too many calories. If successful, McDonald's could have to remove cheeseburgers, milkshakes and the Filet-o-Fish from its menu. (Via Wall Street Journal)

But as tensions between the US and Russia escalate, the targeting of a premier American brand is raising eyebrows. NBC said McDonald's "could be the next victim of a proxy war​" between the two powers.

After all, this Russian consumer protection agency has a history of political action.

After the 2006 election of a pro-U.S. government in Moldova, the same agency banned wine from the eastern European country for allegedly containing "pesticides" and "heavy metals" (Via The New York Times)

And just this month, Russia announced it would be banning Ukrainian dairy products after finding unidentified "harmful" substances. (Via Dairy Reporter)

"One day we don't like Moldovian wine, then suddenly imported Georgian wine gets banned. This ban, and campaign against McDonald's, is a typical case of the same sort. (Via Euronews)

McDonald's has fallen victim to Russian foreign policy before. The company was forced to close three locations in Crimea after Russia invaded the peninsula in April. (Via RT)

Although Russia didn't force the closures, McDonald's said it was necessary after the suspension of banking services in the region. The move was met in Russia with calls to ban all McDonald's in the country. (Via France 24)

These attacks on the Golden Arches show how far Russia's opinion of the west has fallen. When McDonald's opened its first Russian location in 1990, the line stretched for miles. (via Europa)

On Saturday, McDonald's said it had yet to receive an official complaint for its Russian locations.