Russia-China Gas Deal Is About More Than Just Energy 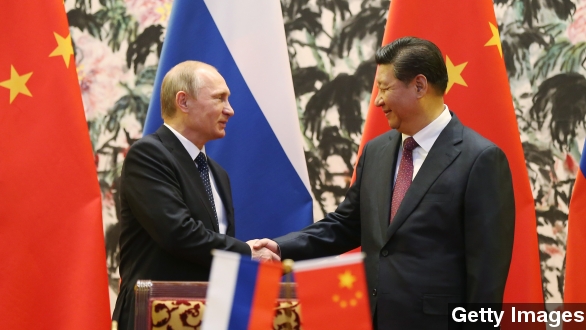 The Presidents of Russia and China inked a deal Sunday to send 30 billion cubic meters of Russian gas to China over a 30-year period.

The deal bolsters an existing energy pact valued at $400 billion signed by the two countries last May. (Video via RT)

And viewed in the context of falling global oil prices, an ongoing APEC summit, and geopolitical conflict involving Beijing and Moscow, the deal seems to be about more than just energy.

Vladimir Putin himself believes the recent global drop in oil prices was engineered as a punishment for oil dependent Russia in response to its military involvement in Crimea and east Ukraine. (Video via PBS Newshour)

And a move like that would not be without precedent. (Video via BBC)

Last March, the son of former President Ronald Reagan wrote "Since selling oil was the source of the Kremlin's wealth, my father got the Saudis to flood the market with cheap oil." Reagan suggested President Obama should also use oil prices to keep Russian aggression in check.

Sunday's deal provides added assurance that Russian energy will continue to have a market. But it is also part of a strengthening relationship between the two countries.

Putin has met with his Chinese counterpart 10 times in less than two years. (Video via Al Jazeera)

As political scientist Graham Allison told The New York Times, "There's a personal chemistry you can see. They like each other, and they can relate to each other. They talk to each other with a candor and a level of cooperation they don't find with other partners."

And one item that unites the two is a shared mistrust of the U.S.

As the U.S. attempts its "pivot to Asia" and contemplates joining the emerging Trans-Pacific Partnership, China is notably absent from the free-trade agreement, instead pushing its own Pacific trade deal.

And while the U.S. and China battle for dominance in the global marketplace, Russia has made China its largest trade partner.

During talks between Russia and China on the sidelines of the ongoing APEC summit, Putin said cooperation between the countries is "extremely important for keeping the world in line with international law, making it more stable."