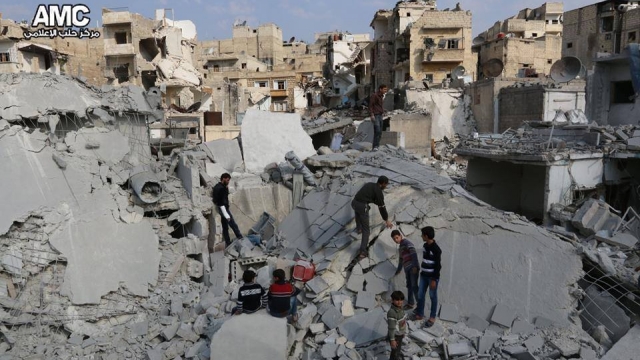 SMS
This Syrian City Has A Short Window Of Time For Humanitarian Aid
By Ryan Biek
By Ryan Biek
October 18, 2016
Russia and Syria agreed to stop bombing the war-torn city for eight hours on Thursday.
SHOW TRANSCRIPT

Russia and Syria agreed to stop bombing Aleppo for eight hours on Thursday so humanitarian aid could reach the city.

Civilians were getting relief in September before a U.N. convoy was attacked, killing 20 people. The attack was blamed on Russia, which denied any wrongdoing, and aid was suspended.

SEE MORE: The Aleppo Siege, As Explained By A White Helmet

Airstrikes have killed hundreds of people in the past month, including many children.

Thursday's brief cease-fire may be a small victory for the U.S. and European Union, which have demanded Russia and Syria stop bombing Aleppo. But it's well-short of the total cease-fire the West has been pushing for.

A United Nations official said Monday, "If we cannot find a solution [by December], Aleppo will not be there anymore."

Eight hours might not be enough time. The U.N. said aid convoys require 12 hours to reach those in need.