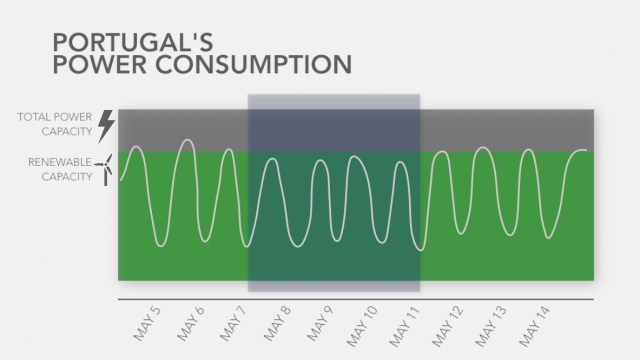 SMS
Running On Renewable Energy Is Still Mostly A Matter Of Luck
By Evan Thomas
By Evan Thomas
June 2, 2016
Flashy headlines about entire countries running on renewable energy — however briefly — are still generally the exception, not the rule.
SHOW TRANSCRIPT

Those are impressive headlines, even for countries that invest heavily in renewable energy. Because even with all that infrastructure, a lot of their achievement comes down to getting lucky.

So far in 2016, Portugal has generated 75 percent of its electricity through renewable sources. Normally that's not enough to cover its needs. It only worked because demand was low and weather was especially favorable during four days in May.

Denmark did it with the help of brief high winds. It was able to meet 140 percent of its energy requirements one day, and it exported the excess.

Strong winds also helped Germany hit its nationwide power requirements for an hour, while demand for energy was low over the weekend.

In the U.S., it's a lot harder to cross that threshold — and that's mostly thanks to scale. The energy market is much larger, and renewables make up a smaller portion of it.

There are exceptions. Burlington, Vermont, runs on renewable energy, and other, larger cities have plans to follow suit within a couple decades.

But even as renewable energy prices trend downward and installed capacity trends upward, it will be a while before we see headlines like these from the U.S.