'Runner's High' Is More Than Endorphins 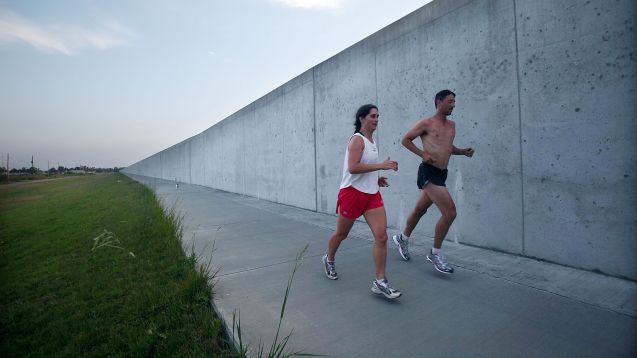 SMS
'Runner's High' Is More Than Endorphins
By Katie Link
By Katie Link
September 2, 2015
Researchers have discovered the hormone leptin affects our motivation to run and contributes to the euphoria we feel.
SHOW TRANSCRIPT

It's no secret that exercise makes you feel better. Your brain releases endorphins during prolonged physical movement that give you a sense of euphoria. Well, researchers out of the University of Montreal say endorphins aren't the only reason you feel happy at the end of your jog. (Video via The White House)

In a study published in the journal Cell Metabolism, researchers say the hormone leptin also impacts how you feel while running.

Leptin helps control your body's energy and is credited with telling your brain when your stomach is or isn't full. Research shows your leptin levels fall when you run, which makes you feel hungry. In response, your body releases dopamine and with it, a jolt of happiness — commonly referred to as a "runner's high." (Video via Running Number)

The researchers experimented with two sets of mice — one normal group and one genetically modified with a lack of protein STAT3. STAT3 activates the leptin signal in neurons that release dopamine. The normal mice ran about 6 kilometers, or roughly 3.7 miles, a day. But the leptin-lacking mice nearly doubled that, logging 11 kilometers, or about 6.8 miles, per day. (Video via Kit Menke)

One of the theories behind this is when food is scarce, people will go running in search of it.

Lead researcher Stephanie Fulton said, "The more fat there is, the more leptin there is and and the less we feel like eating. Our findings now show that this hormone also plays a vital role in motivation to run. ... Lower leptin levels increase running performance and promotes the 'runner’s high.'"

Simply put, the lower the leptin levels, the higher the motivation to run — possibly to the nearest grocery store or fast-food place.