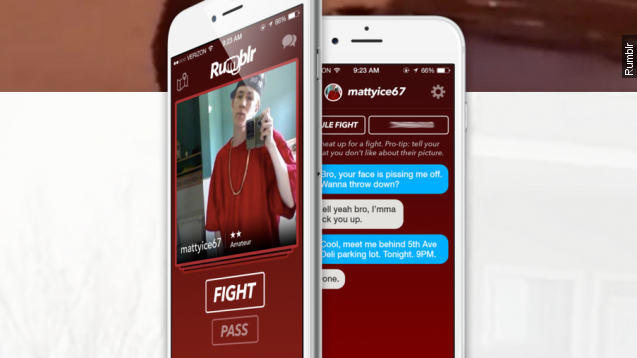 It's not April Fool's Day but we fell for it anyway. Which was Rumblr's point all along.

Rumblr, spelled like Tumblr with an extra "r," describes itself as being a lot like the dating app Tinder, except Rumblr is for meeting up with strangers ... to fight.

No surprise, it's a fake. The app claimed to help users organize fights and broadcast the details so non-fighters can show up to watch. Which makes this all seem super illegal, yeah, red flags raised.

Fight clubs were around before 1996 when author Chuck Palahniuk coined the term in his book. Then, in 1999, "Fight Club" became the often referenced movie. (Video via The New York Public Library, 20th Century Fox / "Fight Club")

Now, every time news pops up about consensual group-fighting, they're called fight clubs. And, yes, people at these events are usually charged with crimes.

Depending on the circumstances — and the state where the fight takes place — the charges could include assault, disorderly conduct or disturbing the peace.

Then there are the cases where spectators pay money to watch the fights. When those types of matches are discovered, attendees can be charged with participating in unregulated prize-fighting. (Video via CNN)

Seeing as these types of brawls are usually against the law, Rumblr probably would've made it a lot easier for police to find offenders.

A creative consulting agency called von Hughes is the mastermind behind this fake app.

The company released a statement Monday evening, reading in part, "We understand that some of you were genuinely looking forward to using an app like Rumblr, and we’re sorry to disappoint. However, if you still are truly wishing to release some built-up angst, consider fighting more pressing issues such as gang violence, domestic abuse, and at-risk youth culture."