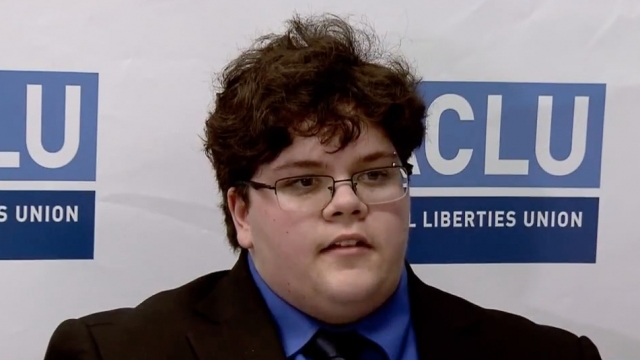 SMS
Ruling In Favor Of Transgender Teen Could Affect NC 'Bathroom Bill'
By Jamal Andress
By Jamal Andress
April 19, 2016
This marks the first time a federal appeals court has considered bathroom restrictions in light of Title IX, which could have national implications.
SHOW TRANSCRIPT

A federal appeals court in Virginia has made a decision that could have some wide-ranging implications, including for North Carolina's debated "bathroom bill."

In a 2-1 ruling, the U.S. Fourth Circuit Court of Appeals has determined that banning a transgender teen from using a boys bathroom is discriminatory.

"No kid struggling to be accepted and struggling to accept themselves should have to simultaneously battle for the right to use the correct bathroom," Gavin Grimm said.

That teen is Gavin Grimm, who was banned from using the bathroom of the gender he identifies with.

Judge Henry Floyd wrote in the majority opinion, "The individual's sex as male or female is to be generally determined by reference to the student's gender identity."

This marks the first time a federal appeals court has considered bathroom restrictions in light of Title IX, a federal law that prohibits discrimination in schools based on sex.

Aside from setting precedent with what Title IX does and does not protect, this ruling also could have implications in North Carolina because the 4th Circuit, where Grimm's case was tried, includes the Tar Heel state.

"We should continue to have the tradition that we've been having in this country for years — we have a women's facility and a men's facility," North Carolina Gov. Pat McCrory said.

As for Grimm, his discrimination lawsuit now moves back to a lower court to be reheard.