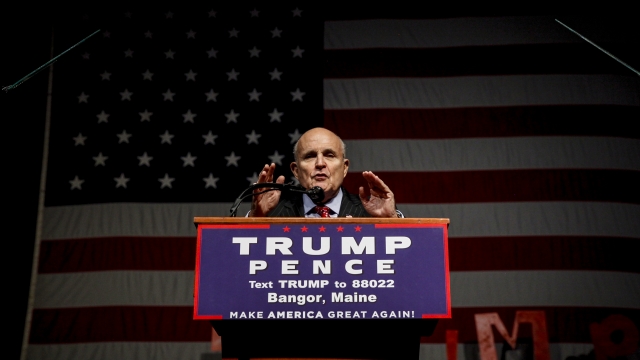 SMS
Rudy Giuliani Made A Case To Be The Country's Next Attorney General
By Lindsey Pulse
By Lindsey Pulse
November 10, 2016
He didn't outright say he'd take the position, but he did highlight his strong track record with the Justice Department.
SHOW TRANSCRIPT

"There's probably nobody that knows the Justice Department better than me," Rudy Giuliani said.

Rudy Giuliani just made his case to become the next attorney general of the United States.

The former mayor of New York City appeared on CNN's "New Day," in an interview with Chris Cuomo and said he has a pretty strong track record with the Justice Department.

"I was an assistant U.S. attorney," Giuliani said. "I was the associate attorney general of the United States, third-ranking official under Ronald Reagan."

Giuliani also cited his experience arguing in front of the Supreme Court and working as a personal lawyer and U.S. attorney.

Rumors have put the politician — along with New Jersey Gov. Chris Christie — near the top of the list to replace current Attorney General Loretta Lynch.

When Christie was asked whether he'd be interested in the position on the "Today" show, he refused to directly answer and asked, "You really don't think I'm answering any of these questions, do you?"

But we should emphasize Giuliani didn't outright say he'd take the position. Cuomo asked him if he'd be willing to give up his current endeavors if he gets an offer.

Giuliani said he'd have to give some serious thought to that. He said he'd be OK if the fit isn't quite right.

"Getting a job is secondary to me," Giuliani said. "I want him to have a good administration."

Giuliani also addressed Thursday's meeting between current president Barack Obama and President-elect Donald Trump. He said he thinks they'll be able to talk professionally "like two of the very few people in the history of the world — one who has the power, and one who is going to hold the power."