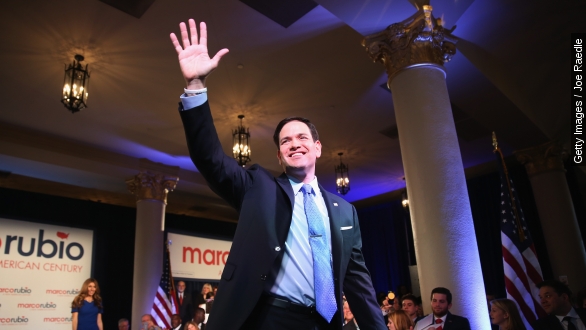 Marco Rubio is officially on the campaign trail, and his first big challenge is winning the Republican nomination in a crowded pool of candidates.

"Tonight, grounded by the lessons of our history, but inspired by the promise of our future, I announce my candidacy for president of the United States," Rubio said Monday.

It's a meteoric rise for the sophomore senator, who was elected amid a surge of tea party support in 2010. But there's one big issue Rubio has to tackle to win the Republican nomination — his stance on immigration.

"Deporting all illegal immigrants is not a practical solution. But ignoring the fact that they're here is just as bad," Rubio said in 2013.

Rubio was part of the "Gang of Eight," a bipartisan group of senators who authored a comprehensive immigration reform bill in 2013.

That bill included a legal pathway to citizenship for illegal immigrants, something hardline conservatives stringently oppose. Rubio's support of the bill lost him a lot of favor in the tea party.

"People are furious about this," activist David Caulkett told WPTV.

The measure passed the Senate but ultimately stalled in the House, and Rubio quickly began backtracking.

Last year, he told a group of immigration protesters, "You don't have a right to illegally immigrate to the United States."

Now, with the GOP nomination for president on the line, Rubio's immigration rhetoric focuses more and more on border security.

Rubio told CPAC this year, "What I've learned, is that you can't even have a conversation about that until people believe and know — not just believe, but it is proven to them — that future illegal immigration will be controlled."

Immigration looks to be more of a hot-button issue for the GOP in this election than usual; a recent Pew Research Center study found 52 percent of voters and 60 percent of Republicans view the issue as a top priority.

And Rubio's shift in immigration priorities is widely seen as a political liability. One political scientist told USA Today immigration is "the issue his opponents could use to paint him as a flip-flopper."

But Rubio might not be in as much trouble as everyone thinks. Remember, the last GOP presidential nominee had his own albatross to deal with.

"Gov. Romney was the author of Romneycare, which, read an article today, has 15 different items directly in common with Obamacare," former GOP nominee Rick Santorum said.

Mitt Romney's association with President Obama's health care law could have been a poison pill for his campaign — but the former governor managed to win the nomination anyway, thanks to strong messaging on the issue.

A Romney campaign ad told voters in 2012, "Day one. Job one. Repeal Obamacare."

A writer for Bloomberg thinks Rubio can pull a similar trick with immigration: "Romney, in effect, flattered Republicans by reassuring them they were the good guys, regardless of any minor disagreement on the legislation. So all Rubio has to do on immigration is convince his (former) opponents that he is one of them."

It's still early in his campaign, but Rubio's already signaling he's planning to confront immigration head-on. He announced his run for president from Miami's Freedom Tower, which played a crucial role in assimilating thousands of Cuban immigrants during the '60s and '70s.

This video includes images from Getty Images and Tom Schaefer / CC BY SA 2.5, CC BY 3.0.