Royal Baby Easel Tradition Is More Important Than You Think 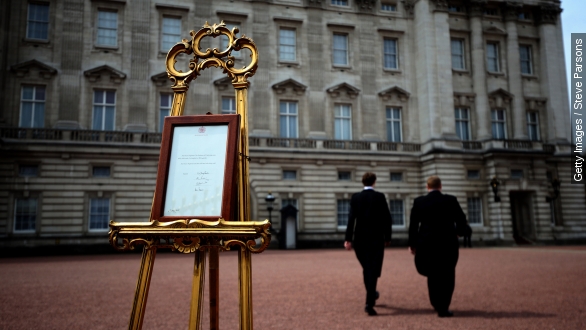 SMS
Royal Baby Easel Tradition Is More Important Than You Think
May 2, 2015
The birth of the new princess had already been announced via Twitter hours prior, but the easel is a centuries-old tradition based in security.
SHOW TRANSCRIPT

Hundreds of well-wishers welcomed the royal family’s newest member at St. Mary’s Hospital in London, and she’s pretty obviously the most popular person in the kingdom right now.

The “she” part was a secret kept well enough even the man who acted as town crier for the media and the crowds had to scribble a date and circle the gender on his scroll.

But in the age-old tradition, a footman placed a paper proclamation announcing the baby’s birth on an easel at Buckingham Palace.

“... was safely delivered of a daughter.”

Now, Kensington Palace had already announced the little girl’s birth and weight hours prior over Twitter, but the easel tradition goes back centuries — the signatures from the doctors who delivered the baby a sign of security.

“In the very, very olden days, there was always the question of a substitute baby being sneaked into the royal bed rather than the actual one who had been born," BBC's analyst said.

“The home secretary used to be present at the birth,” BBC's anchor said.

The easel, however, did not clue us into the new princess’s name. We’ll have to wait for the royals to announce that and give us a look at the new princess. (Video via CNN)