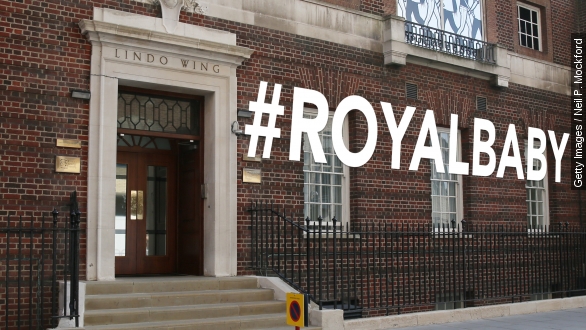 SMS
Royal Baby Birth To Be Delivered On Twitter
By Mikah Sargent
By Mikah Sargent
April 27, 2015
The Duke and Duchess of Cambridge will announce the birth of their next child on Twitter before the traditional Buckingham Palace easel announcement.
SHOW TRANSCRIPT

Quick question: how excited are you for the birth of the newest royal baby? O.K., clearly very excited. Well, if you’ve yet to sign up for Twitter, now’s the time, because the birth of Prince George's little brother or sister will be announced on the social media service.

According to The Sunday Times, news of the birth will be tweeted out "shortly after the Duke of Cambridge has watched the delivery of his second child."

That said, it’s totally fine if the traditional reveal is more your thing; the announcement will still make its way to the easel outside of Buckingham Palace — just not before the news hits Twitter. (Video via ABC)

The International Business Times quotes royal sources who say the easel announcement will be much less theatrical this time around. "The signed document will be taken out of a side door and delivered to the palace in an unmarked vehicle."

It appears the Duke and Duchess of Cambridge, who are both in their early thirties, are taking a more modern approach to the pomp and frills of yesteryear. The Business Times notes the royals used Twitter to confirm the couple's engagement.

We'd venture to guess Her Majesty Queen Elizabeth II won't take too much issue with the tech-forward change. After all, The Queen herself sent her first tweet in October 2014 to announce a new gallery opening at London's Science Museum. (Video via The Telegraph)

You'll definitely want to keep your eyes on Twitter over the next few days. According to the Daily Mail, Kate Middleton will be overdue if the baby doesn't arrive by May 1.