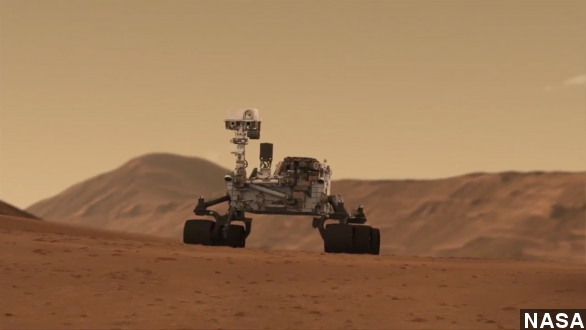 By Sebastian Martinez
December 17, 2014
NASA's Curiosity rover detected methane on Mars and organic compounds on the surface, but it doesn't quite prove there was life ... yet.
SHOW TRANSCRIPT

So the Curiosity rover has detected methane on Mars. Cue scientific freakout.

For the first time, the rover has seen a spike in the gas in Gale Crater, which means Mars is an active environment. That's why this is newsworthy, despite the fact scientists had already observed methane in the planet's atmosphere from earth. (Video via NASA)

That basically means there's just more stuff happening on the planet and in the planet's atmosphere than previously thought, but that's not why everybody's freaking out.

No, headlines like these are prompted by one thing, and one thing alone — in our experience here on Earth, more than 90 percent of the time, methane is produced by living things, so people think it could therefore be a sign of life on Mars.

And it could be — scientists say there could be microbial organisms hiding in the rock of the planet, producing this methane. But it could also not be — we really don't know yet, as Curiosity scientists John Grotzinger told the BBC.

"We also know that it is produced inorganically so a planet like Mars, any place other than earth, we have to first falsify the null hypothesis, that it is abiotic, so there's nothing that we can measure that allows us to do that," Grotzinger said.

So scientists can't prove just yet that living organisms are producing, or ever produced the gas, as the BBC explains, because the samples aren't substantial enough to measure the carbon isotopes in the methane.

Isotopes, in this case, basically serve as markers of whether something is biological or not. The overwhelming majority of carbon found in living organisms on earth tends to be carbon 12. (Video via RicochetScience)

NASA's Danny Galvin explained, "There are several viable non-biological explanations including this organic material could've come down from space, from meteorites or comets. Or organics can be formed by geological reactions in the rock itself."

These clues are just clues, they don't prove that there was life on Mars, just that the requisite parts for life to happen were, and that's enough to get any nerd salivating.

Plus it doesn't help when NASA teases us with renderings like this one, of Gale Crater as a lush, vibrant lake.