The Current Route For The Dakota Access Pipeline Won't Be Approved 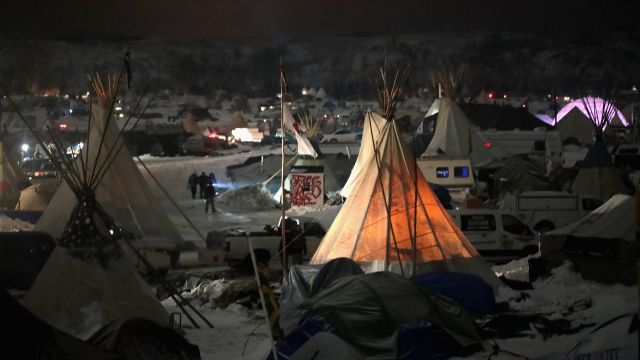 SMS
The Current Route For The Dakota Access Pipeline Won't Be Approved
By Lindsey Pulse
By Lindsey Pulse
December 4, 2016
The 1,172-mile pipeline would have passed under Lake Oahe, a reservoir on the Missouri River.
SHOW TRANSCRIPT

The U.S. Army Corps of Engineers says it will not approve construction permits for the current route for the Dakota Access Pipeline.

The 1,172-mile pipeline would have run under Lake Oahe, a reservoir on the Missouri River, and members of the Standing Rock Sioux Tribe argued it could have potentially contaminated their drinking water, as well as disturbed sacred ground.

The Corps said Sunday afternoon that it will conduct an environmental impact survey and explore different locations for that section of the pipeline.

In a statement, a Corps spokesperson said, "The best way to complete that work responsibly and expeditiously is to explore alternate routes for the pipeline crossing."