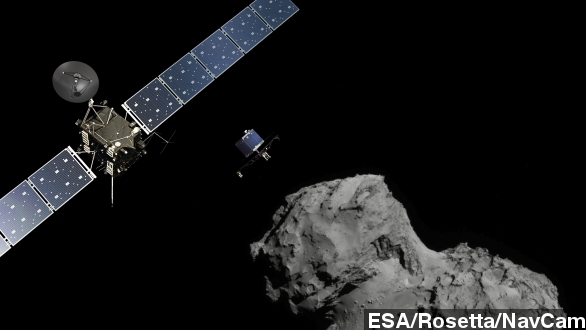 SMS
Rosetta Mission Prepares For Daring Comet Landing
By Steven Sparkman
By Steven Sparkman
November 10, 2014
The 10-year Rosetta mission is reaching its most dangerous phase: deploying a fridge-sized lander to touch down on a comet.
SHOW TRANSCRIPT

A mission that's sent a spacecraft more than 4 billion miles over 10 years is reaching its grand finale this week. We're now in the final hours before the European Space Agency's Rosetta mission will attempt to send a lander down to a comet.

You've probably heard of the Rosetta mission by now because, as space missions go, it's gotten a lot of publicity this year.

Rosetta woke up from a two-and-a-half-year hibernation in January, something the team wasn't 100 percent sure would actually happen. Video of the cheering, clapping, hugging scientists was shown around the web, including here.

Since then, we've seen the complex maneuvers Rosetta has gone through to get into orbit around the comet, been bombarded with first-of-their-kind images of the comet's surface plus the occasional robot selfie, and there was even that bizarre sci-fi short film starring Aiden Gillen — Littlefinger from "Game of Thrones."

"Are you talking about the Rosetta mission?"

But now it's time for the main event: actually landing a robot on the surface of a comet, an historic first for space exploration.

Starting in the early morning hours Wednesday, a refrigerator-sized robot named Philae will detach from Rosetta and drift down toward the comet's surface. The 14-mile trip will take around seven hours, during which the team can do nothing to correct Philae's course.

That means they have to line up a shot at a comet moving 83,000 miles per hour — and spinning — seven hours in advance. That's some space sharpshooting.

NASA compared the stunt to Curiosity landing on Mars in 2012, the fast-paced, rocket-powered ordeal that was dubbed "Seven Minutes of Terror."

NASA: "Space missions fall into one of three categories: difficult, more difficult and ridiculously difficult. ... You thought 'Seven Minutes of Terror' was bad? This will be seven hours of terror."

Even if Philae doesn't survive the trip, though, Rosetta can continue to study the comet. The payoff will be a detailed look at one of the oldest objects in our solar system and possibly a hint about where our planet's water came from.

You'll be able to follow mission updates and a live webcast of the landing at ESA's website.

This video includes images from Getty Images and the European Space Agency.