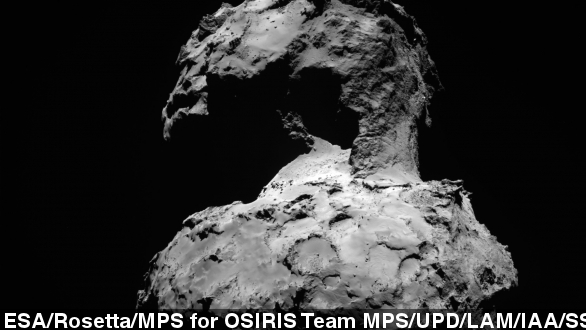 SMS
Rosetta Captures Stunning Views, Diverse Data Of Comet 67P
By Jay Strubberg
By Jay Strubberg
January 23, 2015
The first images of the European Space Agency's Rosetta probe comet orbit could provide clues about its origin and how it got its unique shape.
SHOW TRANSCRIPT

The first images and findings are in from the Rosetta space probe's historic mission as the first spacecraft to ever orbit a comet.

People have been eagerly awaiting the results of the spacecraft's unprecedented comet fly-by since its little helper — the Philae lander — touched down on its dust-covered surface in November.

Comet 67P/Churyumov-Gerasimenko is more commonly known as the "rubber ducky" comet for its shape. The European Space Agency's Rosetta probe captured the images while orbiting. They show a lot of dust, bumps and craters you might expect from a space rock spiraling across the universe. But scientists say there's much more to it than that.

Several media outlets focused on one finding in particular: so-called "goosebumps," which are unique bumps on the comet's surface that could give researchers clues about its origins.

"These goosebumps, these little balls, are really the thing that has made up the comet and then, in larger scale, went on to build up everything in our solar system. ... We're really looking at the fundamental building blocks of our solar system," Open University astronomer and planetary scientist Colin Snodgrass said.

Among others findings, scientists identified 19 unique regions on Comet 67P named after ancient Egyptian deities to keep with the mission's theme.

Researchers also say the comet is mostly composed of ice made from water with dust coated on top. They also found jets of gas creating wind currents, a discovery that shows at least a portion of it is full of activity.

The researchers say this is a big breakthrough in the cosmic realm, and it's been a long time coming. The ESA's comet-seeking mission started a decade ago, and the Rosetta spacecraft has now traveled more than 4 billion miles.

As interesting and eye-opening as the discoveries are, The Verge points out this actually isn't the first time scientists have studied a comet at close distance.

In 2004, NASA's Stardust mission successfully brought home some materials around a comet. And a year later, its Deep Impact mission lived up to its name when the spacecraft actually rammed right into one but not before taking a few close-up shots. (Video via NASA)

But, one of the study's lead authors is quoted in National Geographic saying this time around, the comet encounter is different. "We've got a snapshot. Now we want to see the movie. We want to watch the comet evolve as it approaches the sun, so we can test our hypotheses. That's the big difference between this and other missions."

In the next year, researchers will study what happens to the comet when it heats up as it moves by the Sun. As for the recent findings, you can check them out in the journal Science.

This video includes images from ESA/Rosetta/MPS for OSIRIS Team MPS/UPD/LAM/IAA/SSO/INTA/UPM/DASP/IDA and music from Chris Zabriskie / CC BY 3.0.