Ronda Rousey Thought About Killing Herself After Losing To Holly Holm 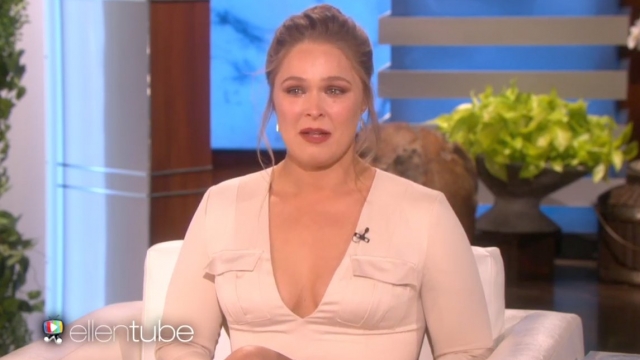 SMS
Ronda Rousey Thought About Killing Herself After Losing To Holly Holm
By Matt Moreno
By Matt Moreno
February 16, 2016
Rousey told Ellen DeGeneres that she was having suicidal thoughts after her Nov. 14 loss, the first of her UFC career.
SHOW TRANSCRIPT

Former UFC bantamweight champion Ronda Rousey made a shocking revelation on "The Ellen DeGeneres Show" Tuesday, admitting she had suicidal thoughts after her Nov. 14 loss to Holly Holm.

"I'm like, 'I'm nothing. What do I do anymore? No one gives a s*** about me anymore without this,'" Rousey told DeGeneres.

Holm's round-two knockout of Rousey is one of the biggest UFC upsets, and it surprised much of the MMA world. It was Rousey's first loss of her 12-win professional career.

Rousey was badly damaged in the fight — something that's unusual for a fighter whose previous four fights lasted a combined total of 2 minutes and 10 seconds.

Rousey revealed to ESPN The Magazine in December, "It might be three to six months before I can eat an apple, let alone take an impact."

UFC president Dana White had originally wanted Rousey to return to the ring for UFC 200 in July for a rematch against Holm, but Rousey's reportedly asked for more time off since the loss.

Before a potential rematch against Rousey, Holm is scheduled to take on Miesha Tate at UFC 196 on March 5.

To watch more of Rousey's interview, click on the link in the transcript or head to the "The Ellen DeGeneres Show" website.

This video includes clips from Dish and UFC and images from Getty Images.