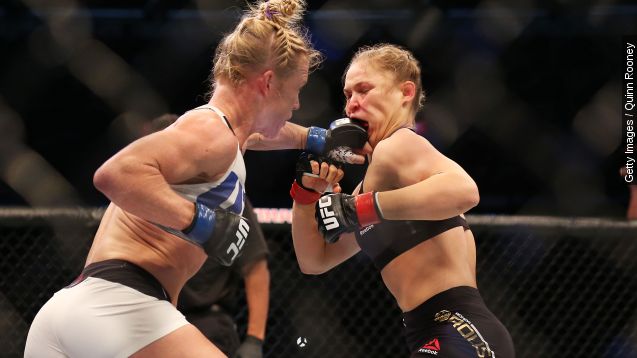 July 9 is the day UFC President Dana White wants to see a rematch between bantamweights Holly Holm and Ronda Rousey. But will it happen?

White told the Los Angeles Times Rousey is Holm's next opponent, and the fight is expected to take place at UFC 200 in the new Las Vegas arena. (Video via UFC)

But Holm's manager, Lenny Fresquez, is skeptical. He told the same outlet Tuesday, "I'm not sure Ronda will be ready for a July fight. She took a severe beating, and I don't think it's in her best interest to take the next fight so fast. They told me she's been ready and cleared, but … " (Video via Dish)

Instead, Holm is reportedly interested in taking on Miesha Tate.

But White seems set on the rematch with Rousey first, telling  ESPN, "Lorenzo [Fertitta] and I should lose our promoters licenses and never be allowed to promote another fight again if we don't make this rematch."

Holm and Rousey have said they're interested in a rematch. But nailing down the time, date and place appears to be the biggest obstacle. (Video via ReadyEverySecond)

According to MixedMartialArts.com, Rousey was medically suspended by the UFC after the Nov. 14 fight for 180 days, or until she gets cleared by a negative head CT scan.

And in an ESPN The Magazine story published online Tuesday, Rousey said, "It might be three to six months before I can eat an apple, let alone take an impact."

From those two assessments, it's tough to imagine Rousey being in top form for a July 9 bout. UFC 200 is expected to be a landmark event, though, and Rousey is as big of a name as there is in the sport. The Holm-Rousey rematch has not yet been finalized.