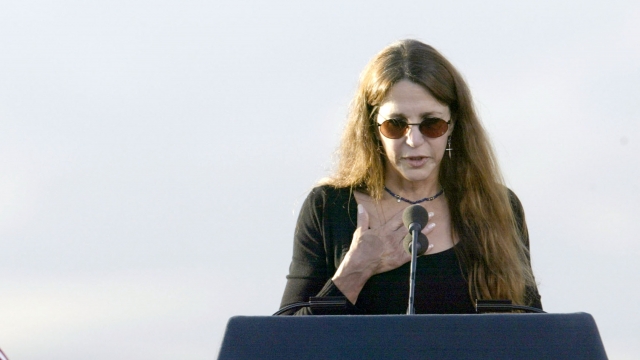 "If she gets to pick her judges, nothing you can do, folks. Although the Second Amendment people, maybe there is, I don't know," Donald Trump said at a rally in North Carolina.

Lots of people have condemned those comments, but one of the most powerful and personal denouncements came from Patti Davis, daughter of former President Ronald Reagan.

Davis said in a Facebook post: "Your glib and horrifying comment about 'Second Amendment people' was heard around the world. … It was heard by the person sitting alone in a room, locked in his own dark fantasies, who sees unbridled violence as a way to make his mark in the world."

She's of course referring to John Hinckley Jr.'s assassination attempt on Reagan in 1981. Reagan was shot in the chest and nearly killed.

Hinckley was found not guilty by reason of insanity after saying the film "Taxi Driver" convinced him to kill the president in the hopes of impressing actress Jodie Foster.

Davis is clearly concerned Trump's comments could inspire a similar act of violence.

Trump and his surrogates framed the remarks as a reference to the political power of the NRA being able to stop Clinton, even though he was speaking hypothetically about a world where Clinton had already been elected.

Former Congresswoman Gabby Giffords, who suffered brain damage after being shot in the head, also denounced the comments, saying Trump's rhetoric could "provide inspiration or permission for those bent on bloodshed."

This video includes clips from C-SPAN, CNN, PBS and Donald J. Trump for President Inc. and images from Getty Images and the Federal Bureau of Investigation. Music provided courtesy of APM Music.