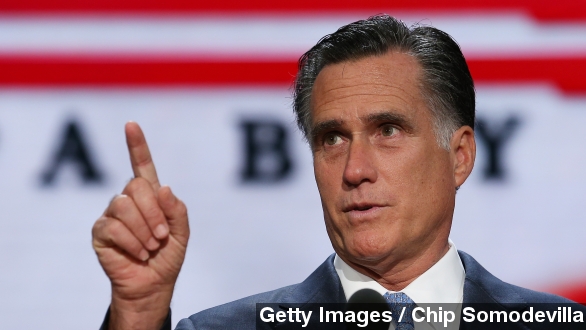 SMS
Romney Vetted Tweets 22 Times: Social Media Tales From 2012
By Matt Picht
By Matt Picht
December 5, 2014
A new paper offers some insights into the digital side of the 2012 presidential race — including how restrictive Romney's social media structure was.
SHOW TRANSCRIPT

How many GOP campaign staffers does Mitt Romney need to send a tweet? That's the political joke of the day Friday after a newly published paper highlighted the digital disparities between the 2012 presidential election campaigns.

The punchline, by the way, is 22. That's according to a former digital executive on the Romney campaign, who is quoted in the paper saying every social media post "had to be sent around to everyone for approval. Towards the end of the campaign that was 22 individuals who had to approve it." Another director joked the campaign sent "the best tweets ever written by 17 people."

This all comes from a study by University of North Carolina journalism professor Daniel Kreiss, which examines how both presidential campaigns, Obama's and Romney's, used social media to promote their message.

Kreiss notes that while Romney's team scored points when they could prepare ahead of time, such as after the first presidential debate, in general the campaign was hindered by a lack of autonomy and couldn't respond quickly to events.

By contrast, Obama's digital staffers were given more free reign and flexibility — which paid off when the team responded to Clint Eastwood's "empty chair" performance at the Republican National Convention with a perfectly timed tweet.

For the most part, the paper confirms what's already established wisdom by this point; the GOP of 2012 was largely outmatched by the Democrats when it came to social media.

But there's another, perhaps more significant takeaway from Kreiss's research — who politicians are targeting on social media.

According to Kreiss, the Organizing for Action PAC that runs President Obama's Twitter isn't crafting their messaging for the account's 50 million followers — instead, they're catering to hardcore supporters and the press. Or, they were in 2012, anyway.

Kreiss quotes Obama's digital director Teddy Goff, who said most of their Twitter activity didn't reach undecided or unconvinced voters. Instead, the campaign focused on reaching Obama's elite supporters and members of the media, in an effort to manipulate the national dialogue about the election in Obama's favor.

Goff argues controlling the Twitter narrative influences how the media covered the story, since many journalists use Twitter as an informal public opinion index. He cites the party's Twitter preparation for the second debate as an example.

"If we were doing well that would be perfectly clear to reporters and if we weren't doing that well they would look at Twitter and see that it was a lot more mixed than they expected."

Kreiss's paper was published in the journal New Media & Society Friday. It's part of a larger book-length project the researcher is working on about how each party adapted to using digital media to win elections over the last decade.