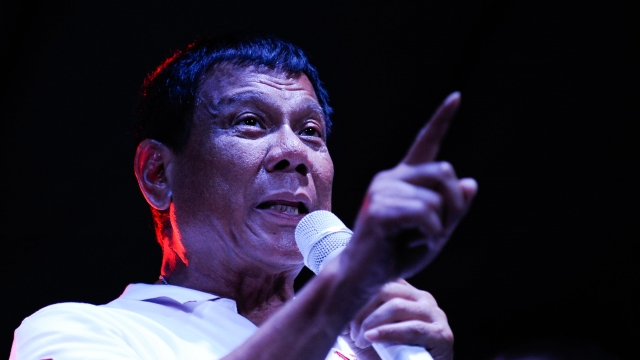 SMS
Philippine President Says He Doesn't Care About Human Rights
By Lindsey Pulse
By Lindsey Pulse
August 7, 2016
The president has vowed to maintain his shoot-to-kill order against those involved in the Philippines' illegal drug trade.
SHOW TRANSCRIPT

In a speech on Sunday, Duterte listed the names of judges, law enforcement agents, military officers and members of Congress, though he admits the accusations may or may not be true.

Now he's calling on the accused officials to surrender — and he says he doesn't care about human rights.

The New York Times reports Duterte defended his decision to release the names, saying, "You can't stop me and I'm not afraid even if you say that I can end up in jail."

He's even encouraged the public to shoot and kill drug dealers. He says that order will remain "until the last day of my term, if I'm still alive by then."

By some estimates, more than 500 people have been killed since June 30 — the day Duterte took office. Most of those executed were suspected by authorities of being drug dealers.