Rockies Get What They Need Out Of Shocking Tulowitzki Trade 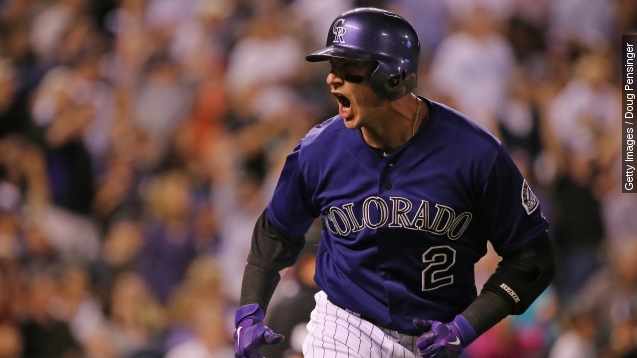 SMS
Rockies Get What They Need Out Of Shocking Tulowitzki Trade

"To say this one came out of nowhere would be an understatement." That's how NBC Sports described Monday's surprising trade of Rockies shortstop Troy Tulowitzki to the Blue Jays, and there's not much disagreement.

Tulowitzki's long been rumored to have been on the trading block for the Rockies — he's an elite offensive talent at a position where offense is tough to come by. But this year, it finally looked like the 30-year-old fan favorite would be settling in Denver for good.

"We're going to have to come up with a new cheer," KMGH anchors said.

The deal is a bit more shocking since the Blue Jays are already the league's most powerful offense. Toronto is averaging 5.28 runs per game. That's .63 more runs per game than the next closest team.

But, for the Rockies, this deal is exactly what they needed.

Last year, the Rockies offense finished third overall in runs scored per game, only to be plagued by the league's worst pitching staff — allowing 5.05 runs per game on average. They finished the year with the league's second-worst record at (66-96).

And they're on the same track this year — solid offense, sub-par pitching and in the cellar of the National League West.

With this deal, the Rockies could turn things around in the near future. They've still got a core of solid young players, and flipping Reyes for more pitching isn't out of the realm of possibilties.

As for the Blue Jays, it certainly wouldn't hurt them to also add more pitching before Friday afternoon's deadline. They're currently several games back of the New York Yankees in the AL East.

This video includes images from Getty Images and music from