Robin Williams' Loved Ones In Their Own Words 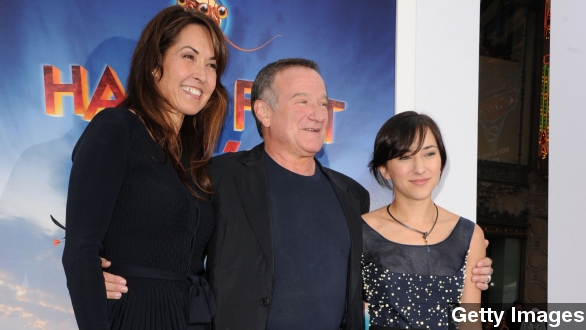 ​Amid the outpouring of grief for Robin Williams this week, there's been some insensitive — and at times hurtful — media coverage, including arguably unnecessary details about how the actor died. This, as his family tries to grieve privately.

Williams' wife, Susan Schneider, has released a statement — asking news outlets to publish what she said in full. In its entirety, it reads:

"Robin spent so much of his life helping others. Whether he was entertaining millions on stage, film or television, our troops on the frontlines, or comforting a sick child — Robin wanted us to laugh and to feel less afraid.

"Since his passing, all of us who loved Robin have found some solace in the tremendous outpouring of affection and admiration for him from the millions of people whose lives he touched. His greatest legacy, besides his three children, is the joy and happiness he offered to others, particularly to those fighting personal battles.

"Robin's sobriety was intact and he was brave as he struggled with his own battles of depression, anxiety as well as early stages of Parkinson's Disease, which he was not yet ready to share publicly.

"It is our hope in the wake of Robin's tragic passing, that others will find the strength to seek the care and support they need to treat whatever battles they are facing so they may feel less afraid."

Shortly after his death, Schneider said she'd lost her best friend. This latest statement clarifies — despite media reports suggesting otherwise — Williams was sober when he died. We hadn't heard before now he was in the early stages of Parkinson's.

Williams' children — Zak, Cody and Zelda — have also paid tribute to their dad through their own statements. Zelda said without her father, her world was "a little darker, less colorful and less full of laughter."

It was she who, facing online bullying after her dad's death, decided to quit social media altogether.

She was the focus on Williams' last post on social media — an Instagram throwback message in which the actor and comedian wished her a happy birthday.

In Schneider's statement, she encouraged others to seek treatment for whatever battles they're facing. If you or someone you know needs help, you can call the National Suicide Prevention Lifeline at 1-800-273-TALK.