Robert Durst On 'The Jinx': I 'Killed Them All, Of Course' 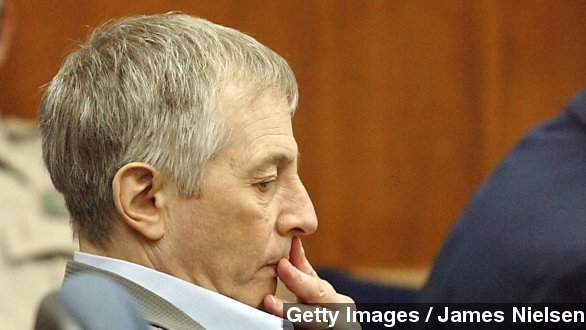 The day after Robert Durst was arrested by FBI agents, the final episode of the documentary about the millionaire aired on HBO.

And at the end of his last interview, the man linked to two killings and the disappearance of his first wife made what sounded like a shocking confession.

The audio is apparently from around 2013, but it didn’t air until Sunday night. Convenient timing — the show’s director says the crew only recently found the footage. Just in time for a finale episode. It seems Durst was unaware he was still fully mic'ed when he headed into the bathroom during the closing moments of "The Jinx"'s sixth and final episode.

The New York Times lays out a timeline, saying the footage was taped more than two years ago in the fall of 2013.

Which is mathematically impossible.

Leading to some speculation HBO colluded with authorities to get some publicity for its series in exchange for some pretty big, delayed-release evidence.

"It's a little too convenient for someone in my line of work. ... I don't believe it's a coincidence or a surprise at all. ... We very much expected this," Lewis said.

Which is what Durst’s attorney Chip Lewis suggested in a phone interview with KABC.

Seventy-one-year-old Durst is accused of killing his friend Susan Berman in 2000. He is also suspected in the 1982 disappearance of his wife, Kathleen.

The filmmakers had just finished questioning him about similarities in handwriting in a letter he wrote and another letter linked to one of the killings he's been connected to.  (Video via HBO / "The Jinx: The Life and Deaths of Robert Durst")

We do know Durst was arrested in New Orleans Saturday night on a first-degree murder warrant from Los Angeles County.

Because Durst registered under an alias at the hotel, paid with cash and had fake documents in his possession, authorities believed he may have been prepping to flee the country, possibly to Cuba. (Video via CBS)