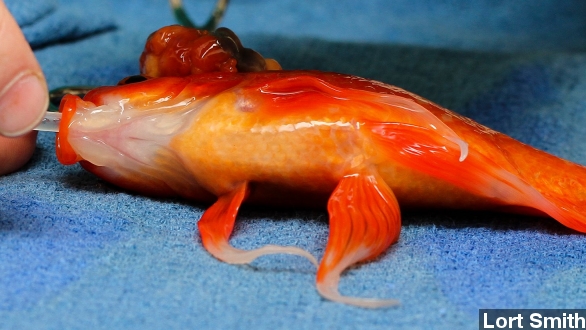 A pet goldfish named George was so loved by his family in Australia, they dished out the dough needed save him from a tumor. (Photos via Lort Smith)

George, the goldfish with the white patch on his head, is now doing just fine, or "swimmingly" as the hospital said. (Video via YouTube / 3AWRadio)

REPORTER, PAUL DOWSLEY: "Over the past year, George had developed a large growth on his head."

DR. TRISTAN RICH: "The fish was having trouble eating, getting around, getting bullied by the other fish."

GEORGE'S OWNER, PIP JOYCE: "Didn't join in as much in their afternoon party games and stuff, you know?"

This particular operation was considered "high-risk," The Washington Post reports. And if you're wondering, here's how you perform such a surgery on a fish.

The fish surgeon, Dr. Tristan Rich, set up three buckets, two of them had varying levels of anesthetic, and the third had clean water and water considered a "recovery unit," according to the animal hospital's Facebook page.

Once out, the fish had a tube inserted that ran from one of the buckets to his mouth so he would stay oxygenated while under the anesthetic. The tumor — which was quite large, relatively speaking — was removed, and the life-saving doctor sealed the wound with four sutures and skin glue.

He's 10 years old. However, according to various reports, the lifespan of a goldfish can be anywhere from 20-30 years. So, George is actually still a young pup ... er ... fish. (Video via YouTube / Tom Bonham)

The Herald Sun says George's owners have about 39 goldfish, some already as old as 18.

And it's fair to say George is REALLY loved by his owners, who spent a couple hundred bucks on this surgery for their tiny family member.