Risk Of Massive Earthquake In Calif. Up To 7 Percent 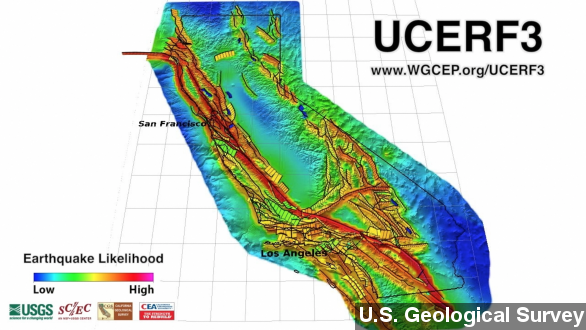 There is now a 7 percent chance that a massive earthquake — magnitude 8 or higher — will hit California in the next 30 years.

The U.S. Geological Survey announced the increase from 4.6 percent in its most recent earthquake rupture forecast, which it released Tuesday.

The USGS put the increased risk down to the possibility of multi-fault ruptures, where multiple faults can rupture at the same time, causing a much more significant earthquake. (Video via U.S. Geological Survey)

That's still a low probability, but it's easy to understand the fear, given the damage past earthquakes have caused.

The Northridge earthquake in 1994 was a magnitude 6.7 quake that caused more than $20 billion worth of damage and killed 57 people. (Video via KCAL)

Just last year the South Napa earthquake — a 6.0 magnitude quake — caused more than $400 million in damage and killed one person. (Video via KNTV)

The closest the state has come to an 8.0 magnitude quake in recent history was 1992's Landers earthquake. Because of its remote location, the 7.3 magnitude quake caused limited damage and cost one person's life. (Video via Morongo Basin Historical Society)

The lead author of the report told the Los Angeles Times: "The message to the average citizen hasn't changed. You live in earthquake country, and you should live every day like it's the day a Big One could hit."