Don't Freak Out About California's Swarm Of Earthquakes Just Yet 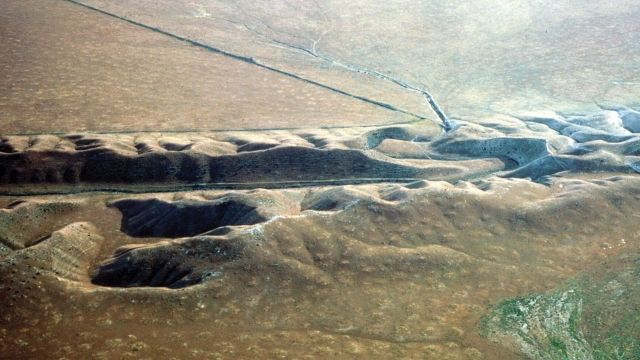 SMS
Don't Freak Out About California's Swarm Of Earthquakes Just Yet
By Briana Koeneman
By Briana Koeneman
September 30, 2016
A series of small quakes rocked an area south of the San Andreas fault this week. But don't panic just yet.
SHOW TRANSCRIPT

A swarm of small earthquakes along the notorious San Andreas fault has increased Southern California's risk for a major one.

No one really felt the more than 200 tiny quakes that rumbled under the Salton Sea earlier this week.

According to the Los Angeles Times, the tremors occurred in a seismic zone south of where the San Andreas fault ends.

And scientists are afraid quakes in that area could one day trigger a huge earthquake. But experts say not to panic quite yet.

This week's small quakes only upped the likelihood of a major quake occurring in the coming days by up to 1 percent.

And experts say swarms like these come and go all the time without causing any large rumbles.

The U.S. Geological Survey said in a statement, "Swarm-like activity in this region has occurred in the past, so this week’s activity, in and of itself, is not necessarily cause for alarm."

As one seismologist told The Desert Sun, "Most likely, nothing more will happen."