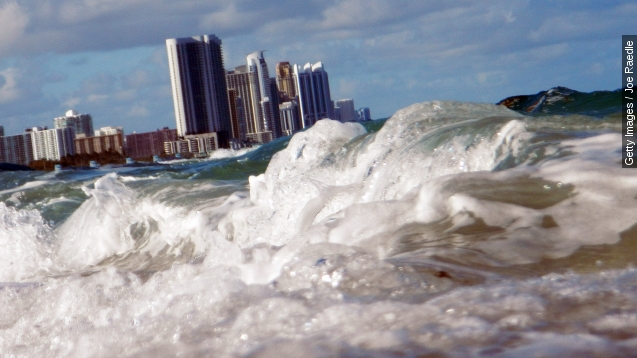 SMS
Rising Sea Levels Threaten Miami And Other Coastal Cities
By Bell Johnson
By Bell Johnson
October 13, 2015
A new study outlines when coastal cities have to reduce their carbon emissions before the risk of sea level flooding increases.
SHOW TRANSCRIPT

We might be saying goodbye to Miami, New Orleans and basically the entire U.S. coast, according to a new study.

Published in the Proceedings of the National Academy of Sciences, the study looked at the impact of carbon emissions on coastal cities and calculated when it would be too late to save those cities by cutting emissions. (Video via NASA)

These coastal doomsday projections are nothing new. There have been many sea level studies, and scientists generally project the sea level will rise 4 to 6 meters by the year 2100. (Video via NASA)

But this study stresses "lock in dates" for each city, a kind of climate deadline were, if emissions aren't drastically cut back by a certain year, at least part of that city is going underwater. (Video via NASA)

Miami and New Orleans have already passed their lock in dates. Meanwhile, New York has until 2095 and Sacramento has until 2050. (Video via The National)

But apparently there's hope for some cities. Researchers believe that extreme cuts to carbon emissions and a shift to using more renewable energy could stop the trend. (Video via CNN)

But these dates shouldn't be taken as set in stone, because there are so many factors at play, no two doomsday studies are alike. For instance, a recent NASA study concluded it's already too late to stave off sea level rise, while the U.N.'s climate panel says that tipping point is years away.