Ringling Bros. To Can Elephant Act Over Treatment Concerns 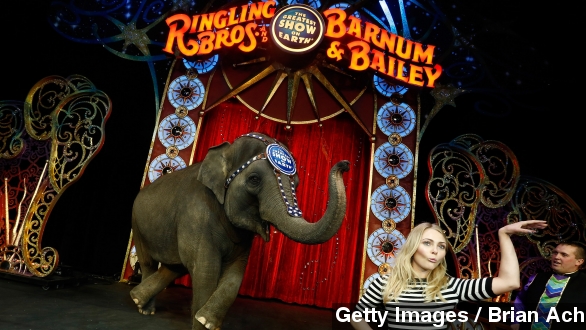 SMS
Ringling Bros. To Can Elephant Act Over Treatment Concerns
By Ben Lawson
By Ben Lawson
March 5, 2015
Elephants were the star attraction, but the circus will soon phase out the act over treatment concerns.
SHOW TRANSCRIPT

For over a century, elephants have been the star attraction at the Ringling Bros. and Barnum & Bailey circuses. But now, those animals are being cut from the act.

Ringling Bros. announced it will stop using elephants by 2018, saying the decision was motivated in part by public concern about how the animals are treated.

Feld Entertainment, Ringling's parent company, has been fighting legislation for years that would restrict how its exotic animals are handled in captivity and during live performances.

Some cities, such as Oakland and Los Angeles, passed bans on bullhooks, which are fire-poker-like prods used to train and control elephants.

"It's a weapon that is used each and every time a circus trainer works with an elephant in order to compel strict obedience," said Los Angeles city council member Paul Koretz.

The 13 elephants currently on tour with the circus will eventually be retired to Ringling's Center for Elephant Conservation in Florida. Approximately 40 Asian elephants are already held there, the largest herd in North America.

"For the first time, SeaWorld is admitting the documentary 'Blackfish' and its boycotts have hurt its business," a WJLA reporter said.

The theme park's attendance dramatically dropped after the release of that documentary, portraying its treatment of orca whales as cruel.

But Ringling's move may not be all about animal conservation.

Fighting legislation restricting elephant use in performances was likely costing the company a pretty penny, so this might just be Ringling throwing in the towel.

Animal rights group PETA, a harsh critic of the company for decades, says if the circus were serious about protecting elephants, it wouldn't wait another three years to stop shows.

This doesn't mean that Ringling will never use animals again. It will still feature camels, tigers, lions, dogs and horses.