Ring Up Another State: Same-Sex Marriage Legal In Florida 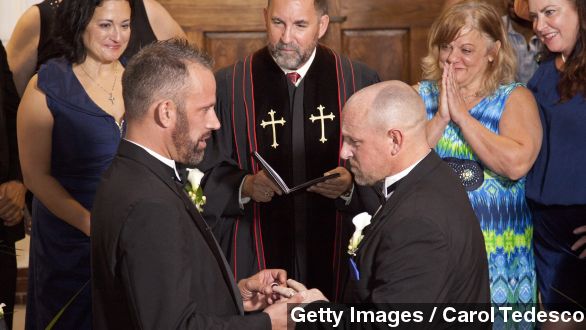 Gay and lesbian couples have begun tying the knot in Florida after a judge gave couples the go ahead to marry Monday.

"I'm lifting the stay."
A packed courtroom of same-sex couples and their supporters cheered as Miami-Dade Circuit Judge Sarah Zabel allowed couples in Miami to get married a day ahead of schedule. (Video via WTLV)

Dozens of same-sex couples lined up in courthouses around the Sunshine State to take advantage of the historic occasion. (Video via WFOR)

In 2008, Florida voters passed an amendment to the state's constitution banning same-sex marriage. But several cases challenged that recently with a Tallahassee-area judge striking it down in August, saying it violates the equal protection clause in the U.S. Constitution. (Video via WPTV)

And while supporters celebrate, opponents of the measure say the judges undermined an issue voters already weighed in on.

"It's the death of democracy in Florida. It's an unfortunate day. It's a day of shame for our state," said Anthony Verdugo of the Christian Family Coalition told WSVN.

The dominoes do continue to fall for states allowing same-sex marriage, and it's all happening very quickly.

When the Defense of Marriage Act was challenged in 2013, gay and lesbian couples were only allowed to wed in nine states, plus Washington D.C.

And it could end up being an even bigger week for gay marriage supporters.

The Washington Post says the U.S. Supreme Court will begin discussions Friday on whether it will start getting involved with lower court rulings, possibly clearing the way for legal same-sex marriage across all fifty states.