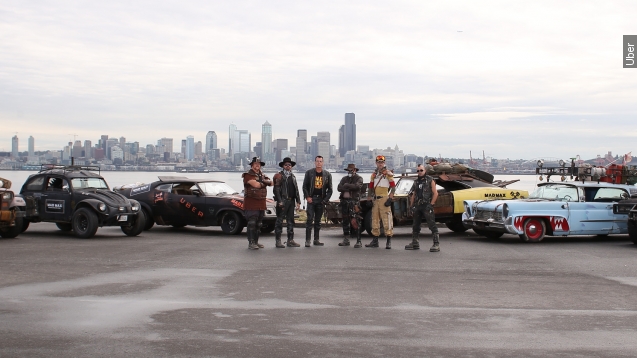 SMS
Riding In A 'Mad Max' Car Is Uber's Latest Promotional Stunt
By Lexie Hammesfahr
By Lexie Hammesfahr
August 31, 2015
In its latest cool stunt, Uber partnered with Warner Bros. to chauffeur people around Seattle in cars from the movie "Mad Max."
SHOW TRANSCRIPT

OK, so the car service app Uber is everyone's bestie, especially since the company partnered with pet adoption facilities to bring puppies and kittens to you on demand.

And Uber has a knack for partnering with film studios to promote movies. (Video via Uber)

It's not the first time Uber has done this, and it probably won't be the last. Uber has partnered with Warner Bros. to promote the "Mad Max" video game in Seattle by offering rides in the film's post-apocalyptic cars.

OK, so maybe this isn't the promotion with the most swag — after all, the company is known to run lavish deals like Uber Chopper, Uber Boats and Uber Charter — but it's definitely one of the coolest. (Video via Orbic Air Helicopter Tours)

And it's the latest uber-unique way to promote films with really sweet (and totally impractical) movie cars.

In 2013, the company introduced Uber DeLorean to San Francisco because the good folks at Uber realized they could make people's dreams of flying in the "Back to the Future" car a reality.

In 2014, it partnered with the video game "Call of Duty" in Los Angeles. Inside the "Call of Duty: Advanced Warfare" military vehicle, riders could watch a Vice documentary, the game trailer and hang with the driver (who, of course, was dressed in theme). (Video via Activision)

Oh, and in 2014, you could've also casually gotten a ride from the Transformer Optimus Prime. That's an experience most fans can only dream of.

Just throwing it out there — Uber should partner with Sony for "Spectre." Rides in Aston Martins with British drivers would be A-OK in my book.