Richard III Saga Ends With Burial And An Eye Roll 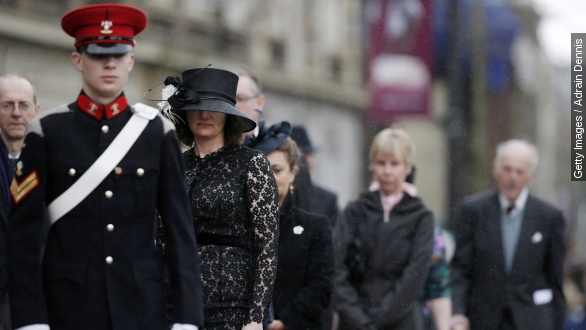 After more than 500 years, Richard III, who was buried in an unmarked grave following his death at Battle of Bosworth Field, finally got a stately funeral Thursday.

Richard was laid to rest in Leicester Cathedral with 700 people there to see him buried, including Prince Edward's wife — the Countess of Wessex — and a celebrity. (Video via BBC)

Benedict Cumberbatch, who was found to be a distant relative of King Richard, read a poem written by British poet laureate Carol Ann Duffy. (Video via Channel 4)

And even the queen gave her approval with a message in the funeral's order of service.

The funeral wasn't without controversy — historian John Ashdown-Hill visibly rolled his eyes when the University of Leicester was given the bulk of the credit for the discovery. (Video via Channel 4)

Ashdown-Hill claims on his site the discovery could've happened much earlier if the university had responded to his proposal in 2009 to excavate at the site where Richard was ultimately found.

On Sunday, the former king's remains, accompanied by a military escort, were taken through notable landmarks from his reign, including the site of the Battle of Bosworth Field where he died. (Video via ODN)

Richard's descendants, who attended the funeral Thursday, laid white roses — a symbol of his royal house of York — on his casket, which his 17th great-grandnephew crafted. (Video via The University of Leicester)

Those descendants played a crucial role in identifying Richard's remains, which were excavated from a parking lot in Leicester by university researchers in 2012. (Video via The University of Leicester)

By tracking the lineage of the former king's sister, researchers were able to test the DNA of two descendants against those of the remains. In February of 2013, the researchers announced they had a match. (Video via The University of Leicester)

A visitor center for Richard III has also been established near where he was discovered.